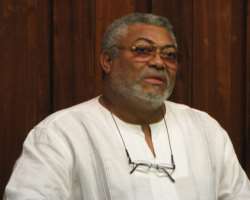 The so-called founder of the governing National Democratic Congress (NDC), ex-president Jerry Rawlings, is an unhappy man. By nature he is at home with dictatorship, loud noise and being at the center of the stage. Rawlings didn’t get all these at the national delegates’ congress of the NDC in Sunyani, Brong Ahafo on July 9 billed to elect a presidential candidate.

When Rawlings stood up to talk, there were no ovations. He was given a very cold reception not fitting a former President and founder of his supposedly own NDC. This should send strong signal to his inexcusable behaviour over the years unbecoming of an ex-President. But when other delegates such as President John Atta Mills got up they were given earsplitting applause. To make matters very, very bitter for the presumptuous Rawlings, his wife was also overwhelmingly defeated by President Mills – 96.9% to 3.1%.

At issue is how democracy is roasting the Rawlingses, and how Ghanaians are learning from that. For her viciously autocratic mind-set, Mrs. Rawlings is nick-named “She Who Must Be Obeyed.” Her defeat by President Mills will certainly humble her in the face of the on-going democratic rigour where the trepidation of yesteryears has been replaced with choices. As Ghanaians master their nascent democracy, it is bringing out all the excesses of the residues of dictatorship that marked Rawlings’ almost 20 years rule of authoritarianism.

For long, inherently believing that he-is-God-sent and dreaded, and, therefore, his behest should be carried out automatically without question, Rawlings has had his way, in the association of some manipulable elites. Heavily superstitious, Rawlings had earlier signed the NDC constitution with his blood and claimed he founded the NDC, though the brains behind the real formation of the NDC have dismissed his claims as fallacious.

Rawlings came into democracy by accident, and he is in no way a genuine democratic such as ex-President John Kufour. Hotheaded, Rawlings sense of democracy is crude, at best mixed with totalitarianism. This has profoundly affected the NDC, where Rawlings has earlier imposed John Atta Mills as the party’s presidential candidate without any regards to the internal democratic structures of the party. For his rough attitude, people like his former Minister of Justice, Obed Asamoah, left the NDC and formed his own party – the Democratic Freedom Party in 2006. For the flowering internal democracy within the NDC after defeat of Mrs. Rawlings, Obed Asamoah has returned to the NDC.

For failing to command Mills presidency for the last two-and-half years, Rawlings has inhumanly worked to demoralize the Mills government and Ghana. He attacks the NDC regime with the slightest chance. This has made President Mills caught between his development agenda and Rawlings’ terrorization. Rawlings has derogatorily called the Mills presidency Team B, greedy bastards, enemies and traitors, among other invectives. This is despite the fact that it is the same people in the Mills presidency who had worked with Rawlings in his almost 20 years rule. How civilly and rationally weak is Rawlings? How troublesome is Rawlings?

The limits of Rawlings’ undemocratic practices were seen when candidate Atta Mills, who was Rawlings’ Vice President, became President Atta Mills. As events revealed, Rawlings’s worked hard to let Atta Mills, whom he sees as weak and controllable, become President of Ghana. Rawlings strategy was to command-and-control President Mills and rule Ghana indirectly through him.

How power drunk can Rawlings be? Notwithstanding ruling Ghana for almost 20 years, Rawlings want to rule more. Regardless of being semi-literate, an emotional wreck, and moral and intellectual weakling, Rawlings, a heavy dabbler in juju-marabou spiritual mediums who have put in him a false sense of messianic destiny, sees himself irrationally as God sent and the best person to rule Ghana.

This situation had come about because some Ghanaian elites, with their hidden political and material agenda, have intensely propped up Rawlings over the years. This has deeply gone into his head. Over the years, Rawlings has become a political albatross on Ghanaians, constantly harassing them and ruffling their fledging democracy.

The Sunyani congress revealed how democracy is simultaneously catching up with Rawlings undemocratic mentality and enriching Ghana’s democracy. Rawlings, before the Sunyani congress, had confidently told NDC parliamentarians that his wife, Nana Konadu, would win the NDC flagbearership hands down. After Nana Konadu’s overwhelming defeat and the couples’ shameful treatment at Sunyani, Rawlings immaturely told some NDC apparatchiks “he has no plans of campaigning for the party’s 2012 Presidential candidate John Evans Mills ever again.”

Rawlings wrongly sees the whole democratic competition where issues, policies and programmes are the main ingredients as war. “I will not follow cowards to war because if you do, you will end up fighting alone because they will end up running and leaving you in the middle of the war.” This is not unexpected of Rawlings, who has tormented the same people he wants them to vote for his wife. The NDC members, who have gradually mastered democratic nuances against backdrop of Rawlings’ pitiable conduct, and who voted for President Mills to lead them in the upcoming general elections think otherwise.

The main import of the icy reception given Rawlings and the shocking defeat of his dear wealthy wife by President Mills is that democracy has eroded the Rawlings juju charms; that people who almost 20 years propped him up despite the huge evidence that he isn’t fit for the complex position of being President of Ghana are now working to use democracy to correct the mistakes of yesteryears; and that democracy is cutting Rawlings to size and subjecting him to the rigours of democratic tenets as any other Ghanaian.

In a sense, the maturing NDC is helping the immature Rawlings,64, to mature democratically, through a fitting egalitarian shower.