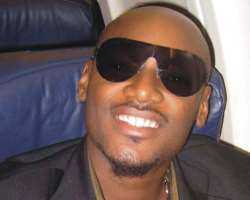 ….Drops Enter The Place Video
2face Idibia's 1st and 2nd albums Face To Face & Grass to Grace respectively is known to have sold over 10million copies and together they have both earned him the prestigious World Music Awards as the best selling Nigerian artist.

After about two years since 2face released his last album, the African queen crooner finally released the album on December 24th, 2008. The official album release party was held that same day and all roads led to Aqua 27, on Adetokunbo Ademola Street , in Victoria Island , the venue of the event.

During the launch the artiste used the opportunity to preview his new video for his recent club banger Enter the Place. After the preview, those that were present at the event rated the video as one of the best video by a Nigerian artiste so far. The video will soon be released to various TV stations both within and outside the shores of Africa.

The Unstoppable album which is 2face's 3rd solo work promises to be his best work yet and it confirms that he is getting better by each album. In the album 2face showed some sign of maturity, with the kind of song he sang.

With his new album, 2face has proven to be an internationally acclaimed superstar and it will be of note that, due to this fact he won the best selling act during the recently held world music award. Few days the album was released it was said to have sold more than 1 million copies.