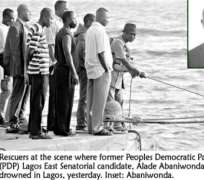 LAGOS, July 20, (THEWILL) – The body of Mr. Al-Mustaim Alade Abaniwonda, 56, has been recovered after he allegedly slipped into the lagoon as he tried to defecate late Monday afternoon.

Abaniwonda until his death was a ministerial nominee from Lagos State, who had earlier contested in the Lagos East Senatorial April poll on the platform of Peoples Democratic Party (PDP) and lost to incumbent Senator Gbenga Ashafa of the Action Congress of Nigeria (ACN).

There are however conflicting reports surrounding the drowning incident. Some eyewitnesses told local media that Abaniwonda deliberately allowed himself drown in the lagoon, while some accounts say he slipped into the lagoon as he sought to ease himself.

He was reported to have been on his way to his office after a meeting at a bank in Marina and told his driver, Wasiu to pull over as he had to use a toilet immediately. His driver according to reports pulled over around Leventis Bus stop in Marina where the politician disembarked from his chauffeur driven Toyota Camry sedan and made for the lagoon, where he drowned after allegedly stripping himself of his entire clothing.

THEWILL gathered that Marine Policemen with the assistance of local boat operators located and eased his remains out of the lagoon at about 12.15pm on Wednesday and thereafter delivered him to his family at his Victoria Garden City (VGC) residence.

He has since been buried at the VGC Cemetery in accordance with Islamic tradition.

Abaniwonda was founder and managing partner of Alade Abaniwonda & Partners, an investment firm and was a former Managing Director of the defunct Crystal Bank.