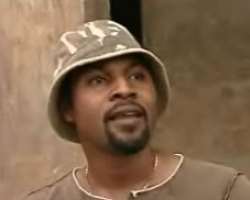 Any hope of reconciliation between star actor, Saheed Balogun, and star actress wife, Fathia Balogun, seems to have been lost in the wake of new revelation emerging from a very close source to the actor. It emerged during the week that the actor late last year remarried and secretly tied the knot in a traditional way with a UK-based lady.

Saheed and Fathia parted ways amidst accusation and counter accusation of infidelity and irresponsibility. Since the separation about two years ago, several people have made notable attempts at reconciling the two warring parties.

Former governor of Lagos State, Ahmed Bola Tinubu and wife tried severally to reconcile the two but Fathia was said to have rebuffed all entreaties. Remi Adiukwu also made moves as god-mother of Saheed to see to it that the two got back together. Her effort was in vain.

People however became hopeful when Fathia was said to have received an award on behalf of Saheed in London and subsequently dedicated her award to him. It was seen by many as an attempt at reconciliation, as hope began to rise that the two stars would reunite and shame their critics.

Instead of news of reconciliation what we heard was news of remarriage by Saheed.

The new wife is a UK-based lady whose name starts with letter O and this reporter saw her in company of Saheed on Allen Avenue, Ikeja, Lagos on Monday before the lady left for UK on Tuesday. She was said to have gone everywhere with Saheed ever since she came in last year and the new husband who appear content with his new bride was proud in showing her off to very close associates.

“Saheed is still discreet at disclosing her full identity because of fear of what Fathia and her supporters might do. You know he believes that the lady is fetish and can ruin his castle of joy if he rushes things,” a very close source to the actor told Showbiz Now. The lady was seen making calls on Saheed's communicator mobile phone and doing what women in love with their husbands would generally do with their husband in public. The British-born, UK-based fair complexion lady we learnt is pleading with Saheed that they relocate to UK immediately after the court marriage but Saheed is said to be loving life here. He has already told the lady that they would cross the bridge when they get there.

•New wife UK-based
•Set to release Oba Asa
•Project Nollywood to remarket Modupe Temi
When we approached the actor to either confirm or deny the news he bluntly told us that he does not have any comment. That enough is a tell-tale sign that the news is true because since we've known Saheed Balogun he always has comments for every question. He however disclosed that he does not pray and hope for a reconciliation with his former wife and mother of his two children, Fathia.

Oba Asa
In a matter of weeks Saheed's highly anticipated movie, Oba Asa would be released on the stable of Aina Kushoro-led marketing company, KUSH. According to the actor, Oba Asa would further prove to all and sundry that movie making is not a joke. “Oba Asa which many people expected would have been out in either 2007 or 2008 will finally be coming out in January or February. It is a must watch movie. I don't want to just talk about it like others but those who saw the quality of works we did with Modupe Temi the first two-cast movie in Nigeria should look forward to something of same quality with Oba Asa.

On whether the movie is a response to his estranged wife's movie, Asa, Saheed said it is not so. “No, not at all. This movie is a modern movie that has message for everyone. I am not bothering my head trying to reply or counter anybody.”

His last movie, Modupe Temi, met with acclaim from creative minds across the country but it was a shock when the marketer of the first two-cast movie, Epsalum, declared that the movie sold an abysmal 17 000 copies. And it is to this end that Saheed is re-licensing the marketing right to Project Nollywood, the movie marketing companied controlled by Charles Novia, Fred Amata, Fidelis Duker, Chico Ejiro and one other person.

“Epsalum and I have settled all our differences, there is no fight whatsoever between us. It is just that I believe the movie has the potential to go far beyond the figure I got hence I am giving Project Nollywood the right to market the movie again. The movie has been shown on two major airlines, and it was the first to be shown on Virgin Nigeria. It is doing very well across the globe so I believe it should do very well in Nigeria.”

Other movies expected from Saheed include, The Rider, a comedy featuring Clem Ohaneze, Peter and Paul, an English movie and one other movie.

American stars are millionaire and Nigerians are not

If a marketer gives 1 million copies, the producer will spend N400. If you are a marketer remain one and if you are a producer remain so, so that everyone can make his or her profit. You can sell a good movie for 15 years.