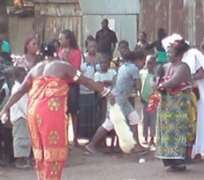 At the centre of the decorated village square, the traditional Akwunechenyi dancers and drummers were busy trying to draw the attention of a wealthy patron that had caught their fancy.

Next to them was Nwazuka, the Egwu-Epkili crooner, dropping notable names from his bandstand, in a frantic bid to overdo the Ogene boys, who were in full gyration to the rhythm of their own music.

Suddenly, the direction of the wind changed. The sky turned cloudy, and the wind started howling thunder storm, which crashed down to drown the chaotic noise in the arena. This was followed by bright flashes of lightening, which bathed the square in an eerie light.

As the few uninitiated stole alarming glances at the storming sky, sniffing at the sudden rain, it came in full force, bathing all present in its full glory. A mighty cheer went up; Ezu-Imo-Oka, Eze-Imo-Oka, has come to endorse our celebration!

For the natives, their day has been made as they would have been dejected that Sunday afternoon of May 22, if they had held the age-long Imo-Oka festival without the sudden rain.

Indeed, Awka town, which is renowned for its rich cultural heritage which manifests in its many festivals and celebrations such as Iyajoku, Onwa-Asaa, Otite, Ndi-Ichie, Egwu-Uzu and the famous Imo-Awka festival, among others, have had some of these gone extinct but for the Egwu-Uzu and Imo-Oka festivals.

The origin of the Imo-Oka festival could be traced back to some centuries ago, when the Awka town imported the deity from Abia State or Edo State.

Some school of thought had it that Imo-Oka, a female deity, was imported into Awka from the Ada people in the present day Abia State, while another school traces its root to the culture of the Igala people in the former Midwestern Nigeria.

According to the Ezenmuo (Chief Priest) of the shrine, Chief Chukwurah, the fearsome deity plays the role of a guardian and a protector of sorts, especially in times of war and looming outside threats to the community.

'Awka people are known and recognized for their bravery. Several victories, like the famous 18th Century 'Agha-Ejeoma', which was fought with the Ndikelionwu people is till today attributed to the protection and intervention of our shrine and its messengers. This is how we managed to gain traditional superiority over other people', the chief priest said.

The chief priest said that four major feasts associated with the festival include: The Ede-Mmuo, Ogwu Oghugha, Egwu Opu-Eke and the final Egwu Imo-Oka.

'The Opu-Eke dance is a rich cultural dance performed by female worshipers of Imo-Oka shrine, culminating into the next day's finale and grand Imo-Oka festival, also known as Egwu Imo-Oka.' Among these four arms of the festival, the Opu-Eke dance (Egwu Opu-Eke), is worthy of note. On the day of the dance, the women decked in colourful costume, costly beads and other pieces of jewelry dance extensively in the market square in honour of the deity controlling the shrine.

One of the women, Ojiefi Nwanduta  Nweke, told Daily Sun that the dance dating back few centuries ago, was designed to include women in the celebrations.

'The women here are true worshippers of Imo-Oka, and we show it through this age-old dance. As you can see, it happens on the Afo market day preceding the Egwu Imo-Oka. Among us, you can see priestesses and ordinary women alike,' she said.

Mr Emeke Nwogbo, a Federal House of Representatives-elect and President General of Awka town, told Daily Sun that the Imo-Oka shrine is symbolic and is represented by the unique white-bellied monkey, popularly revered and respected as the messengers of the shrine.

'These monkeys which are better known as (Enwe Imoka), mainly behave like humans and are believed to be vessels of warnings of impending danger to the town; so, it is considered a taboo to shoot or eat these monkeys.

'The festival which is celebrated at the beginning of the farming season signifies the hope of the townspeople that their female deity will make the land fertile so as to yield bountiful crops. Also, it's a time for the town to seek for sundry favours that will enable the community to grow, especially for those sojourning in other towns to fare well,' Nwogbo explained.

The preparation of the festival starts in late April of every year and runs through the middle of May, when the celebration reaches its peak, he said, adding that during the final and main week of the festival, the afore-mentioned four main celebrations take place.

As the festival gains intensity, the Awka people living in the main town choose one day to visit their brothers at Umuokpu, a settlement of Awka people some kilometers away in order to alert them that the time for the celebration has come. Formerly, this is one of the most dreaded days of the festival, which have given it so much notoriety because of the indiscriminate bloodshed witnessed on that day.

This had been a major source of worry both for sojourners living in the capital city and the indigenes. The number of youths lost every year during the festival has prompted many people to conclude that the festival is a harvest of death, rather than a celebration of the goddess of fertility and protection.

Gladly enough, the just concluded festival brought a sigh of relief to many parents and families, as for the first time in many years no life was lost to the celebration.

Nwogbo had attributed the lack of killings this year as a result of meticulous planning and the provision of adequate security measures, which ensured that both the old and the young alike adhered to the rules of the game.

'A lot had gone into the planning of this festival. If you look around, you can see that the security network we have here is to a large extent competent and ready to quell any disturbance.  Last year too, the violence was reduced to a minimal level. Hopefully, by next year, there might not be a need for security agents, since people are getting to understand that our culture does not support it', he said.

Speaking on the violence, a former youth leader in the town and Head, Department of Political Science, Nnamdi Azikiwe University, Awka, Dr. Frank-Collins Okafor, stated that the violence originated from the misconception of the display of strength and skill from young men from ancient times.

'In the olden days young men were encouraged to come out and display their battle skills during the festival. These are not done with dangerous weapons, and are mainly for the entertainment of the audience. But these days, we are seriously worried that violence has taken over the celebrations, which were once peaceful.

'These days, you discover that non-indigenes are fingered as the harbingers of violence; they bring in guns, machetes, daggers and so on into the festival, and before you know it, people have started dropping dead,' the university don lamented. The Imo-Oka festival showcases different kinds of masquerades (Mmanwu), which are believed to be spirits of the Awka ancestors coming from the land of the dead for a visit. The looks on these colourfully masked figures range from benevolent to menacing and from vicious to downright clownish.

The higher masquerades are Agaba, Ijele, Okwonmma, Izaga, Ugo, Isiabaofia, Akum, and so on. The lesser ones are Ojionu, Adanma, Diochi, Osi-asili, Atunma, among others. These form an array of 'spirits' that parade the town with their foot soldiers throughout the festivals. The fierce ones like Agaba, sometimes flog bystanders or demand for money while the more mild ones like the Atunma sing for money or criticize people depending on its mood.

Another major and sometimes awesome feature of the festival is the visit of the Ezu or Ilala-Imo-Oka. This is the Imo-Oka stream, which comes according to the people, to grace the final day of the celebration. This is manifested in the heavy rain that falls in the afternoon of that day without the usual warning signs, like the normal rainfall would always give.

Curiously the 'invited rain' does not stop the celebrations as musicians, masquerades and the people who trooped out, continue with the dancing and merriment as if it were normal to dance under the rain.

Sure enough, the rain stops after about 20 minutes; as they all knew it would and the celebration continues happily; as the people believe that their forefathers had indeed come down to bless them. But many ask, why is the festival shrouded in secrecy if the deity is not a blood gulping entity? For Dr. Collins Okafor, the heathen aspect of the celebrations is exclusive only to idol worshippers. This ultimately separates the Christian faithful who have no wish to join in the celebration, from sworn adherents of the shrine and its deity.

'Because the deity is not original to Awka town, it was brought in some centuries ago, people had other gods and deities they were worshipping before that and with the advent of Christianity, many converts ceased to worship any of the deities, Imo-Oka inclusive, converting to full Christianity.

'However, because many are not idol worshippers, they don't have the knowledge of the inner workings of the festival. Even the participation of the Eze-Uzu (King) of Awka is limited because he's a Christian', Dr. Okafor said.

Also the president general, Nwogbo debunked the secrecy theory, saying 'secrecy brings ebube (awe), this is what other deities postulate, and it is important in getting the necessary respect and awe that should be accorded that particular deity. But here, the proceedings are as open as daylight, there is nothing superstitious or fetish about what we are doing.

'We are just trying to protect and preserve the salient points of our culture and heritage, which will soon be packaged in such a way as to attract foreigners and visitors within and outside Nigeria, just like the Eyo Masquerade in Lagos.' Equally speaking on the secrecy, an Ajaiyija titled man, Mr. Ositadinma Okafor, said that the much touted secrecy does not necessarily mean that the deity is an unapproachable one by its adherents, pointing out that in the years past, Awka people solicited protection from the deity when they are about to embark on a journey.

'Even though I am a Christian, I know that the Imo-Oka festival is like the Christmas celebration to my people. It brings people together, if you watch closely, you will notice, that there are people from Lagos, Abuja, Port Harcourt and even those from Austria, London, America, China and so on, who came back to enjoy the festival. So, it is not a secret festivity', Ositadinma said.

This is echoed in Dr. Frank-Collins' plea for openness and moderation during the festive period, so that the whole town will join in the festivities, including outsiders and tourists from all parts of the world. 'I am sincerely calling for a reformation, so that we can attract international attention to the celebrations', he said.