Nollywood is full of mediocre and gate-crashers-Binta Ayo Mogaji 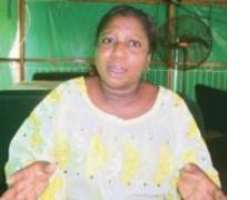 She is in one of the funniest and most natural actresses in Nigeria. A round character with a passion for the make-believe world, Ayo Mogaji Oduleye has done it all. From soap operas to the English and the Yoruba movies industry, Binta Ayo Mogaji has proven her mettle as one of the best. She spoke with Deola Adeoti on her sustaining power.

You've been around for some years now; how have you been able to achieve that?

I'm a professional and a career actor.

What's the difference between a star and a career actor?

These days in Nigeria what you have are stars. It's a mirage of stars, or should I say a galaxy of stars. When some people do one or two things that become popular, they are called stars. But for me, I'm a career actor. This is the only thing I have done all my life. I had been an actor even before home video came. People paid to see me perform on stage. I'm a professional.

Was it a smooth ride for you when it all started?

Well, I started on stage when the commercial viability of the acting business was not as it is now. Therefore, we had to do quite lot of things to sustain ourselves. We were into radio. We were also into TV plays. TV was very popular back then. I was on Village Headmaster, Anter Theatre, Koko Close and quite a number of other TV programmes like that. My major TV plays then were Koko Close, Village Headmaster and Den Set. There were a lot of other series which I acted in, but I can't remember them all anymore. We were not getting paid so much but there was job satisfaction. We were quite happy with what we were doing. We had to dabble into a lot of things while we were doing stage plays; we were also doing radio/TV plays, and so on. At that time, if you were a regular TV actor, you were very lucky because some money would come out of it at the end of the month. Without being immodest I had been a household name before the advent of home video.

I love being an actress and I worked towards it; that was all.

Was there any challenge you faced with your parents for opting for acting?

Normally, you know coming from a strict Muslim home and being a Muslim girl with a strong Quran teaching background, it wasn't easy. My parents were Muslim clerics. My father was an Imam and my mother did Muslim sermon on the radio, so they felt the culture aspect of acting would influence anything I would do in life. But I told them it wasn't like that. It was a bit rough because, my mother, especially, was not really happy with the decision. She preferred that I got a job in the bank because I came out top in my school. So, she was like looking for a job for me in banks and all these white collar companies. However, I insisted I wanted to be an actress. Because of that, I got ostracised; not by my parents, but by myself with the belief that I could make something for myself out of this career. You see, I left home for a couple of years getting by on my own. But like a prodigal child, once in a while, I'd go back home for pocket money. And my mum would ask mockingly, “I thought you are now working and if you are then, you should be making money from your work.” My mum was a professional teacher, and eventually she started reading about my efforts in the newspapers. Sometimes when we are preparing for a stage performance and they did reviews on us, she read them. And by and by, she calmed down. So anytime she bought a newspaper, she first went to the last page to see if there was anything written about me. The full support came later, but they weren't happy initially. Their question was what a Muslim girl was dong in the art world.

Is there any day you will never forget as an actress?

The day I had a show at the Pec Repertory Theatre. The title of the play was “Offensive,” an American play written by Hubert Wilson. I played a role in it. There was a particular scene which was very emotional. The play was directed by Chuck Mike. It was a collective artiste play. After I played that highly emotional role, the then American Ambassador came back stage with a can of Sprite and asked me: “Are you alright?” And he handed me the can Sprite. That was a long time ago but it was the most memorable day of my career. That ambassador's name I remember was Princeton Nathan Lyman. I had acted that role crying with the whole crowd crying with me. Immediately after I finished playing that role and took a bow from the stage, the American Ambassador came to meet me back stage. I mean, it meant so much to me then. That must have been about seventeen years ago.

What is your opinion on the current state of the Nigerian movie industry?

It is still stagnant. Back in the days people were doing it for passion and not for the money or fame. A person like me and some people with whom I started together, when we were on stage, our adrenaline pumped. When I see people who have come to see me perform, I look at those heads and I'm like: Yes! They have come to see me and they must get what they want. The urge to satisfy your audience was always there and you couldn't afford to make mistakes on stage. Television is very easy. If you make any mistake, they will just cut and join. At the end of the day, it is whatever they think is the best that they will edit and put out to people. In those days, we were majorly after job satisfaction. We were basically feeling good within ourselves to be somebody people would come from far and wide to watch. The difference today is that it's basically commercially viable and then it has embraced all sorts of mediocre gate crashers, so to say. All sorts of people have come into the business and have become 'stars.' But I do not grudge them because that is their mission. And some people like the marketers and producers make it possible for them to become stars. However, there are people who are career-driven in the industry. We may not hear their names often, there may not be anything extraordinary about them, but they are consistent and are always relevant in the scheme of things. They do make things happen.

The home video has taken over the theatre culture in Nigeria, how do you think we can restore the lost glory of theatre practice?

I know; but is this how it used to be?

It is you the media who will help us revive it and make it popular. In those days when we were rehearsing, the print journalists would be there. There would be several previews even before the curtains were opened. There would be so many reviews, too, after the play had been staged. There were so many incentives as well from the multinationals and corporate bodies. But nowadays because of TV, everybody has become so lazy. On TV now, nobody rehearses. No matter how long the play may be, they come and drop your script. You go on set and you sit down to act based on the script you've been given. If you can't say something properly they will ask you to use your own English. There wasn't anything like that on stage. You have to say it the way it was written. People pumped in a lot of money into stage plays, though they don't make as much back. So, I think these are some things that really affect the stage. A lot of people are still working on the stage though.

The National Theatre is trying. A few people and bodies, too, are trying to resuscitate the stage, but because of money, nothing is happening. There are no investors, like all these banks who should be investing their money in the stage as tax rebate on yearly basis. But I hope that the stage culture will come back to the way it used to be. It all started with the advent of home video. Theatre was popular then because there was no home video industry. With time it will just be like Hollywood and Broadway. When Hollywood came, it affected Broadway. And again rather than go into Hollywood, a lot at Broadway artistes preferred to go into TV. They'd rather be on TV than go into movie. So with time it will all change. The industry is still very young anyway, and until we sieve away the wheat from the shaft, nothing can happen. But I know the time will soon come.

What is your assessment of the young actors we now have?

Some of them are quite good. There are even some people who went to school to read Theatre. We have students of Theatre Arts all over the country. But do they really get the jobs to do? It is the gate-crashers who are given the chance. And that's why it looks as if the acting is not very impressive. You also can't blame the artistes entirely, because even most of the directors are not trained; so it's like garbage in-garbage out. When you are not trained, you can't train another person because you don't really know what you are looking for. Some of them are quite impeccable though.

So what's your advice to budding actors?

I tell them all the time; don't cheat those people who went to school to study Theatre Arts. If you want to become a good actor, go to school and enrol in the Theatre Arts department.

Could you briefly tell us about your background?

I'm married to Dr Ayodele Oduleye; a psychotherapist, who is British by birth. He lives there. I have three kids; one biological son and two steps sons who are a set of twins. They live in England; my sons come around once in a while. We are still thinking if we want to go and settle in England. My children like Africa a great deal .That's that about family.

Tell us about your childhood?

Like I told you I'm from a Muslim home. I had two boys and a girl before me and two boys and a girl after me. My father, like I also told you, is a Muslim cleric. He was Chief Imam at the Ansalrudeen Society of Nigeria. My mum is Alhaja S.A Mogaji. She used to be a teacher she is still alive, healthy and kicking. But my father is late. While growing up, I had fun with my siblings. It was a beautiful and fun-filled childhood.
A good stage actor you are, but which of your movies would you consider the best?
Well, I don't really think I have a favourite or best because every little job I have done was a challenge to me. I don't really favour any. But if you ask me to choose based on quality, I would say it's my production Jombo. Jombo is my best in term of story line, the technical aspects and all other stuff. I think I made a statement with it.

Who were the artistes you looked up to?