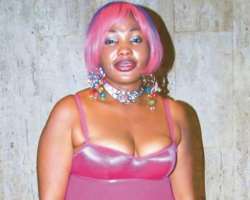 Former gospel singer Gloria Doyle is a classical example of how not to be a born again Christian. Apart from her reported libidinous exploits with some alleged lovers, Gloria seems to get orgasm courting controversy.

Aftermath of her shameful row with a young lover, culminated in being thrown out of the Ogba, Lagos home, she shared with the young man, she went underground and things seem simmer down for her.

But earlier this year, the boob-flaunting Gloria came back in the news when ex-pop music star, Felix Liberty handed over the running of his church's Oregun, Lagos branch to Gloria, who was then his assistant pastor.

While turning the church to the self-acclaimed born-again, he described her as a new creature and a wonderful lady of God. But six months after, the song has changed as the two now fight over the ownership of the church.

Gloria has annexed, renamed and proclaimed herself the General Overseer of the church.

It was a show of shame as the two exchanged words almost in the full glare of passers-by.

Few weeks after that, Gloria has extended her trouble to the beleaguered Performing Musician Association of Nigeria, PMAN.

We learnt that this femme fatale is bent on forcing her way to become the spokesperson of Preddy Wise faction of PMAN, using her relationship with the new factional president of the association the two are said to have dated.And this,we learnt,is already creating rumpus among the executives and some members of the association.

It was learnt that those averse to Gloria becoming the face of the association, have proposed songstress Yinka Davies, who is one of the Vice-Presidents of the faction, as more creditable instead of the controversial Gloria.

But deep-pocket Preddy is unyielding.