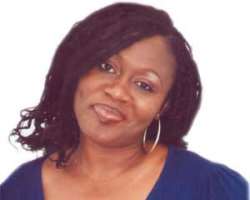 Mandy Uzonitsha is one of the pioneer female stand-up comedians we have in Nigeria. In this interview with Aramide Pius, she speaks on her career, how she copes with single parenthood as well as her challenges on the job, among many issues. Enjoy:

You're a mother, are you a wife? You didn't mention that you're a wife.

Can you please explain that, how can you be a mother without being a wife?

We have people that are mothers and not wives, you know. I'm a mother, that's all.

Is it a normal thing not to be a wife and be a mother?

They say you're the first female comedian in Nigeria? Is it true?

I don't know.
But you claim it yourself.
Because I know it.
Why do you say you're the first female comedian?
Because I'm the first Nigerian lady ever seen doing stand-up. And you see when people talk, like in abroad, they talk with statistics, with points, reasons, this one did this in so-so-so year, etc. And thank God, if I say I'm the first, I have a proof. Why? The first time we had the first ever Ayo Animashun's Girls' Nite Out was the first time we had all the girls in the industry performing under one roof.

The ones that were into sound were on the console, those that were behind cameras, and it was like that, everybody was doing something. If you were not on stage, you were off it. They were looking for a stand-up comedian and they wanted to get Binta Ayo-Mogaji who stays in Ibadan to crack jokes. I went there to do my normal Afro beat or my reggae. They kept looking for a female comedian. I remembered that in that same year, February 14, 1999, I had done something for Bacchus Lite. I was the MC, and I was just cracking jokes unknown to me that that was stand-up comedy.

So, at Girls' Nite Out, when they said it was important, I told them I could do it and I brought the house down.

Do you feel justified being the first, when it seems that Princess is more visible than you?

But that's where we make a lot of mistakes. There are places Princess is needed and places Mandy is needed, just like Ali Baba and Basket Mouth. Where Ali goes, Basket Mouth doesn't. I've been lucky in the jobs I've done. I'm not talking about peanut jobs here. I'm talking about doing one job and resting. I don't hustle for jobs.

People know me for the queen I am, and they call me. When it comes to feminine products, I'm always first choice. I don't do anyhow jobs because I'm a mother. Provision for my daughter comes first. I listen to Sasha singing that she's tired of not getting paid for shows.

When someone told me sometime ago that Princess was everywhere and I wasn't, I replied that the time I was everywhere, Princess wasn't born. I don't have to be in every newspaper cos I've done that in the past. If I bring my bag of newspaper cuttings, it's a full Ghana-must-go bag. A few years ago, CNN, BBC, Reuters were running after me. Why must I still be doing it? Seyi Law, as a small comedian, will be everywhere, but Ali Baba will not.

So what's the relationship between you female comedians and your male counterparts?

Pleasant. We are together. It pains me that female comedy has not taken the centre-stage, it's not where it's supposed to be. But it doesn't bother me because there are professions where the females are more favoured, like Nollywood where the female stars are so plenty while you can count the males on your fingers. There are so many reasons why female comedians have not taken centre-stage. But one of the reasons can never be that we are not good. We are good.

I'm trying. Every time I have an interview, I cry about this same thing. Image is everything in show business, but I don't paint that picture that we are doing well, we are living large, we have money, go to Oceanic Bank, type Mandy, you'll see 6 figures. Nooooo, I won't paint that picture. I'll tell you that we need more jobs. A man is having an event for his company and he says, get me Basket Mouth, Okey Bakassi, and Julius Agwu. But your brand. Do you have females that use your brand? Have you thought about it? Is there a representation there in that list you just called? Someone who has even been getting great jobs like I get is Lepacious Bose. I don't know about Princess cos she wasn't in the country for a while. She just got back.

We are more than three. We have Helen Paul, she is very good, she does mimicry of a little baby. We have Dudu Evans, the albino girl. We have Deola Chatterbucks, Najite Dede that's now into directing and the rest. We have females. Now let me just use this as an appeal. Anybody that's reading this, and you are a female and you know you are funny, what I mean funny is that your friends comment on your ability to make them laugh, that's the first sign for you to know you are extraordinary, you have it inside you. So please if you know you have that, just get in touch with me.

Assuming an upcoming female comedian gets in touch with you, how are you going to help her?

The first thing I'll do for her is take her for events. When I go for events, I'll take her and I'll tell them to give her five minutes to just display. People can see her there and start talking about her. And the media too will be there to pick it.

How long have you been in comedy?
All my life. As a profession, I started with The Charly Boy Show, and it's not a soap opera, it's a comedy show. I've been faithful to comedy.

What's the rewards been like for you?
Rewards? It depends on what you want. Rewards? At least we put food on our table. We don't beg for food. We feed ourselves and feed others too. And we take care of our parents.

You're very proud of your daughter. Tell us about her.

I'm a proud mother. My daughter is four, her name is April, she's on vacation now, as you can see, I'm all alone, home alone, thank God. She's a handful, I'm proud of her because she's always tops, you know, unlike when I was growing up, when you go and check the result, you always start from the bottom to see our name there. When you want to go and find out April's scores, you start from the top. I'm just proud of her, she makes me happy, she's the reason I'm living for now, because I want to do everything to give her the best in life.

I went to have April and till today, everybody has been screaming at me that I took off to have a baby when my career was at its peak. Now, they will say I'm not serious if I have another baby. The kids will come when they want to come.

But let us provide for the ones we have. It's not compulsory that one will even have a child. Some people don't even have one. I'm grateful to God that I have one and if He wants to give me another one, He should kindly send it to someone who's in dire need of a child now, than to give it to me. I don't need a child now, now, now, but when I need it, God will bring it.