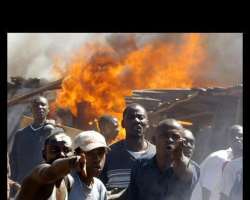 IT was meant to be the best-equipped multimedia studio in the South West Nigeria. Equalled, perhaps, only by a few in Lagos and Abuja. It would have started full operation in December 2008. But alleged arsonists rendered that desire a dream deferred.

For the man at the centre of it all, High Chief Ifayemi Ayinde Elebuibon, "it was like a nightmare. But a nightmare I have to live with". That was the situation of 101 Audio-Visual Studio located on Yemi Elebuibon Street, Osogbo, Osun State.

That Tuesday in November was like any other day. Elebuibon had left his house knowing that finishing touches were being put to the works going on in his planned audio-visual multimedia studio a few metres away from his residence on Yemi Elebuibon Street, Osogbo, Osun State.

He had two major programmes that day. One in Ibadan and the other in Osogbo. "I chose that of Osogbo because it comes up only once in a year and also because it was a programme of an association I headed before, the Osun State chapter of the Association of Nigerian Theatre Practitioners (ANTP)."

They were barely two hours into the meeting at the Cultural Centre, Osogbo when a call came that he, Elebuibon, should come home immediately 'because of a fire outbreak'.

He stood in one corner watching an investment of over N15 million going up in flames. Although the building that housed the studio started years before, work on the studio itself took off about two years earlier.

"The idea of the studio came to me as a result of the troubles we normally go through in an attempt to produce our works. We normally have to go to Lagos or Ibadan to get a simple studio work done."

His sojourning to overseas' countries particularly in Europe and America and part of what he experienced in local studios here in Nigeria convinced him that establishing a studio in Osogbo was a matter of necessity.

Named 101 Audio-Visual Studio, the burnt project was equipped with facilities for recording, editing, production and post-production works of audio as well as audio-visual works.

Among the equipments that burnt were acoustics, camcorder, computers, vtr, microphones, speakers among others

Unfortunately, the studio had not been insured by the time it got burnt 'since we had not completed work on it".

The fire started in the morning but did not become noticeable until about 11 a.m. The circumstance of the fire led to the supposition that petrol or related inflammable substance must have been sprayed on it. And as the sun scorched, it caught fire. A source at Dugbe Police Station, Osogbo handling the investigation spoke along this line, but said that no clear statement could be made yet until investigations were completed.

On what would be the next line of action, Elebuibon said that he did not want to give up on the project. "I do not have money to bring what was destroyed back immediately. But I don't want to give up on the plan to have a modern, well-equipped studio in Osogbo. I hope that public spirited individuals, groups, and even governments will come to our aid".

Born a little over 61 years ago, Ifayemi Elebuibon has been contributing to the cultural uplift of Nigeria. He is a world-renowned Ifa priest and a visiting lecturer/consultant in this genre at San Franscisco University in the United States of America.

Apart from this, he is also a dramatist, a poet and writer. He has a number of musical compositions as well as dramatic works to his credits. He has appeared on television programmes at home and abroad on several occasions for years.

Ifa Olokun Asorodayo, his creation was a television drama series that ran on the NTA, Ibadan for years. Among his popular musical works were Ejire Ara Isokun, Eeyan Won while some of his books are Obatala 1 & II; Apetebi; Invisible Powers of the Metaphysical World: A Peep Into the World of Witches.