..AS THEY ELECT SPEAKER FROM N'WEST 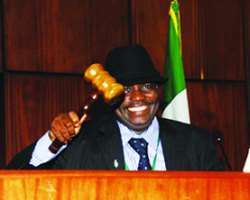 Members of the PDP-controlled House of Representatives yesterday served notice of what to expect in the Seventh National Assembly when they defied the directive of the rulling Peoples Democratic Party to elect Hon. Aminu Waziri Tambuwal Speaker.

Forty-five-year-old lawyer and member of the Body of Benchers, Tambuwal emerged after about three hours of voting by members. His election dealt a severe blow to the zoning arrangement of the ruling Peoples Democratic Party [PDP], which gave the position to the South- west.

With his election, the North West now has the position of the Vice President and Speaker. The PDP had warned its members to preserve the zoning arrangement by casting their votes for Mrs Mulikat Akande Adeola, the anointed candidate of the party. The party had dumped Mr. Muraina Ajibola after weeks of intrigues and political permutation. To enforce the zoning order, the leadership of PDP stormed the National Assembly and took vintage position inside the chamber to monitor how members would vote.

They were joined by the new Secretary to the Government of the Federation [SGF], Senator Anyim Pius Anyium, Governor of Abia State, Theodore Orji, his Kogi and Bayelsa State counterparts, Ibrahim Idris and Timipre Sylva. Chief Anenih left the chamber immediately Tambuwal stood up to accept his nomination as a contestant in the speakership race, while the PDP acting chairman left the chamber midway into the voting. Tambuwal's election climaxed two-week high-tech horse trading, intensive lobby, threats and several nocturnal meetings to sway him from realizing his ambition.

At a point, he went underground to resist the temptations of yielding to pressures mounted by the party and various interest groups that were sympathetic to the ruling party.

Hours before the proclamation of the new National Assembly by President Goodluck Jonathan, through the Clerk of National Assembly [CNA], Alhaji Salisu Maikasuwa, it was rumoured that he Tambuwal might be denied access to the chamber. Haunted by the possibilities of an arrest to prevent him from entering the chamber, he had to appear in an Ijaw outfit of a suit with a black bowler cap, popularly referred to as 'Resource Control.'

Tambuwal was practically smuggled into the chamber by over 20 members, who formed a ring around him apparently to shield him from the prying eyes of security agents.

His nomination was made by Mr Emmanuel Jime from Benue State and seconded by Mrs Nnena Ukeje from Abia State and at exactly 12 16 pm, Tambuwal stood to accept his nomination.

But before his nomination, the mention of his name was always accompanied   with a loud ovation by members. At the close of vote which lasted for over three hours and counting by the Clerk Sani Omolori, who was supervised by the CNA and the DCNA, Mr Muyiwa Adejokun, Tambuwal polled 252 votes to beat Adeola-Akande, who scored 90 votes. A total of eight votes were voided, while five members abstained from voting. Five members were absent, including a dead member from Kano State.

Members, who had followed the count of votes religiously massed around Tambuwal and lifted him up when the result was finally announced and he was pronounced the new Speaker.

He was immediately invited to the podium to take the oath of office, which was administered by the CNA at exactly 4.42pm.

The gavel and a copy of House Rules were handed over to him before he took his seat, while the Sergeant-at Arms placed the mace, which is the symbol of authority on the table.

The chamber rose in applause to welcome the new speaker as he hit the gavel.

After, the CNA called for the nomination of Deputy Speaker and Hon Seriki Adar from Sokoto State nominated the former Chief Whip, Emeka Ihedioha from Imo State, his nomination was seconded by Hon Usman Bello Kumo from Gombe state.

Mr Friday Itula from Edo State had wanted to make a counter motion, but when he saw the mood of the House, he changed and declared support for the nomination of Ihedioha, saying that there was no need to oppose him.

Mr Bethel Amadi from Imo State had nominated Mrs Akande-Adeola as an aspirant. Her nomination was seconded by Mr Namadi Useni from Jigawa state. Before Tambuwal was pronounced as the speaker, Mulikat left her seat after the counting of Tambuwal's votes to congratulate his as new speaker. She had walked briskly into the chamber, accompanied by a friend at about 10.30am and about four minutes later, the former speaker, Mrs Patricia Etteh and her deputy, Babangida Nguruoje walked in through the back entrance.

Tambuwal was first elected into the House of Representatives in 2003 on the platform of the All Nigeria Peoples Party [ANPP] to represent Kebbe/Tambuwal federal constituency of Sokoto State. Before the completion of his first term, he crossed over to the PDP and won a return ticket in 2007, after which he was elected as deputy chief whip of the House. A lawyer, Tambuwal attended Tambuwal Primary School, Government Teachers College, Dogon-Daji for the Grade 2 Certificate and later proceeded to the Usman Dan Fodio University, Sokoto where he studied Law. He later attended the Nigerian Law School, Lagos for his B.L Certificate in 1992. Tambuwal is a member, of the Body of Benchers, the highest decision-making body for the Nigerian legal profession. He had served the Nigerian Bar Association [NBA] in different capacities between 1996 till date.

He is married and has four children.