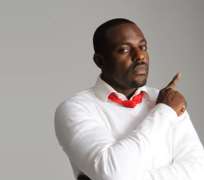 The alleged story was that the actor got into an argument/fight with a hawker on Wednesday May 18 at about 2pm at Aminu Kano Crescent ,Wuse 11 Abuja. It was alleged that the hawker made Jim angry after he asked the actor for a tip after showing an apparently lost Jim how to get to his destination.

But the actor has denied he was ever in a fight. His version of the story when you continue...

The penchant for exaggeration and sensationalism of thewillnigeria.com, a website run by Mr. Austyn Ogannah, is staggering. It has become the bane of some blog and website runners of low repute who understand my deep-rooted aversion for comments on social networks, to therefore use it to the fullest to perpetrate their aim to constantly mud sling my person.

The site in question is managed from Los Angeles, and I dare say, they understand the legal implications of their unprofessional and malicious article. They are also aware that to seek legal redress in Nigeria would mean a protracted period of time in our courts and by no means a possible resolution of the matter.

To state the facts on what happened on that very day, I was in Abuja and was running late for a very important business meeting. I quickly asked a young man peddling wares on the curbs for directions, and he kindly pointed out the way. Also present in my vehicle was my younger sister and my PA.
I then asked my PA to tip him, then another young man standing by grabbed the cash and tried to get away, but my PA grabbed him and the appropriate exchange was made. Not for one second did I step out of the car.

We had a good laugh about it, and the traffic warden waved us on, and I turned into the right street. I also had a business partner of mine driving behind my vehicle at that point in time. The whole event transpired in less than 3 minutes.

I was shocked a few hours later when my PA brought the baseless article on thewill.com to my attention. The traffic warden and peddlers still operate on the last left turn to the street that leads to Glo office in Wuze 2 in Abuja. Anyone can interview them to authenticate the veracity of my claims. Mr. Austyn Ogannah's attack on my person is a wanton exhibition of gross mediocrity and a clear misguided use of the power of the pen.

This is the last and only statement I wish to make on the matter.

His version of events sounds more like what would have happened. BTW, it was his birthday yesterday. Happy birthday to you Jim. All the best!!!