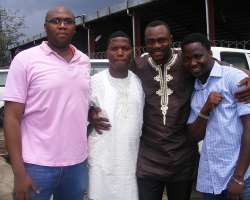 YorubaLoving. The Documentary
Recently launched YouTube channel Yorubalove [http://www.youtube.com/yorubalove] (an IROKO Partners company) have taken a big step towards reducing Internet Piracy, with the launch of the first legal place to watch Yoruba movies online. Starting with 60 movies with the aim to reach 200 fully licensed movies within 3months it is aimed as at legally connecting the millions of Yoruba viewers globally with their home and culture.

The Yoruba movie makers, both the Producers and directors, actors and actresses have therefore pledged their devout support to YorubaLove Channel and have also recognized and endorsed its Legality and Authenticity in distributing the Yoruba movies online. The has been something which has been rigourously questioned by viewers who were upset about the removal of previous channels from YouTube