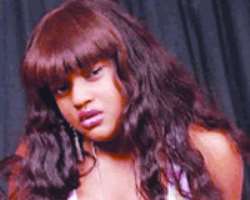 
She is young, bold and ready to go the whole hog in Nollywood. Vivian Egbon is the young actress that tugs the reins of our hearts with her performance in Where Ocean Touch, with Ini Edo and Linc Edochie. She won not a few admirers over. In this interview, she opens up on the story of her life. Excerpts…

Why did you come back after five months in the United States?

I did not go there to stay. I went to do something there and I actually came back because of two things: my movie and the other one is personal. I don't want to talk about it.

Is it because of your boyfriend?
Oh no, it is best known to me, I don't want to tell you that one.

Give us a clue at least
Well, okay, because of my relationship and my career.

When a man loves you, you don't have to be worried about what will happen because the love is there, isn't it?

How has it been as an actress?
It has not been easy and you have to dedicate yourself and put everything into it. But I thank God where I am today.

How did the journey as an actress begin?
It started a long time ago. Actually it started from secondary school and at a point in my life I started thinking about being an actress. I finally succumbed in 2004 as the thing kept disturbing me and I started telling people and friends alike. A friend of mine gave me a director's number. I phoned him and I was invited for audition. That was how I started.

What is the title of your first movie?
Power of Justice.
As your first movie, were you intimidated?
No, I did not feel intimidated. Maybe because I am used to acting as a hobby before I took it up professionally. In my mind I was telling myself that I am in my room just doing my thing and that was how I was able to do it. The most important thing is to be grateful to God, and you know life is full of ups and downs and no matter what you come across you don't have to give in. You must keep working on it to make it better and keep moving.

Are you fulfilled?
No, I would not say so now because one has to keep looking and working on how to grow higher in one's career. In all you need, when you don't have that, you can't say you are fulfilled. But for know, I can say I'm a little bit fulfilled because it is not easy to come this far and you have to seek more because you can never be fulfilled.

What is your reaction to the allegation that producers sleep with actresses to give them roles?

This is a question I had wanted to answer a long time ago and I can tell you it is a big lie. It is all about individuals and you know it is also about what you want as a person. Nobody is just going to raise your two legs and say I want to sleep with you.

How do you handle advances from men?
I let them know I have someone in my life and I don't want to do anything crazy and stupid. I believe the wise ones would get the message.

Have you acted with any of them before?
Sure.
Who are the actors or actresses you look forward to working with?

Though I have done something with Genevieve before, we have not really acted in a movie together and I am looking forward to working with her.

What was childhood like?
Growing up was really fun for me. I grew up with my cousins, brothers and my mum. I am the only girl.

How many are you?
Four boys and a girl, I am the third. Growing up was fun because my brothers were always there for me and they would not allow anything or anybody to hurt me. I am like their pet. For me, it was fun. And they are really happy seeing me where I am today.

Where did you grow up?
I grew up in Agbor, Delta State.
What about your parents?
They are great and it was fun being with them. I love them and growing up with them was interesting because they don't beat you like other parents do. But they caution you with words of wisdom.

Did you grow up with both of them?
Yes.
What is your take on broken marriages?
In marriage, you really need God, patience and understanding and not to listen to bad advice from people. But you find that there are many things that affect marriages now and people don't know they need God in their marriages.

What do you want that God has not given you?
Well, you know the way God works is different from our own ways. There are some things we pray for that would destroy us and God would not give answers to such things because He doesn't want anything that would harm us. And there are some things He does that He uses to test our faith.

What are your plans for tomorrow?
Getting where I want to be and getting higher in life. My plans include settling down in my own home as a wife and mother.

What would make you say yes to a guy?
What I would first consider is if the guy has the fear of God, because if he has the fear of God there would be so many things he won't do. A man that knows how to treat a woman, that a woman is not meant to be hurt. He must be caring and always there to for me.

How old are you?
I'm old enough to handle myself, but really I am in my mid-20s.

Have you ever had someone who wanted to sleep with you before giving you a role?

No, not really, and I don't see why people make so much issue out of it. People in other industries like the banking industry see themselves and go out with each other. So why should this industry be different? People see and ask you out like any other human being. Let me tell you that if you don't have talent, you can't succeed and it would be like they are just using you.

Have you dated or slept with anybody in the industry?

No way.
What is your take about sex?
I guess you know more about that when you are married and you will be cautious when you are in a relationship not to feel used after it fails to work out.

Are you saying you have not had sex before?
I said with caution, and you have to be cautious all the time.

How should it be?
Maybe when you two are engaged or perhaps once in two months or once a month, because if you do it all the time he would get tired of you.