HOW OSAMA WAS KILLED 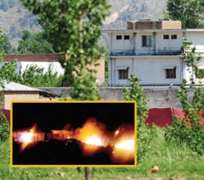 This heightened the tension that gripped President Barack Obama and members of his war cabinet in the White House Situation Room where they monitored the raid.

But the pilot managed to set the helicopter down gently inside the walls of the expansive $1m mansion where the world most wanted man and believed mastermind of the September 11, 2001 terror attacks on Washington and New York lived. On touching the ground, the chopper could not move.

'Obviously, everyone was thinking about Black Hawk Down and Desert One,' a senior administration official recalled as he spoke with an online news portal, Politico.com.

'The assault team went ahead and raided the compound, even though they didn't know if they would have a ride home,' he said.

The special forces put bombs on the crippled chopper and blew it up, then lifted off in two MH-60 reinforcement helicopters, after bursts of fire that lasted about 40 minutes.

Bin Laden's guards were said to have fired rocket-propelled grenades from the roof and at least two explosions rocked the town during the fight.

But the members of Navy SEALs, who flew across the border from Afghanistan, along with tactical signals, intelligence collectors, and navigators using highly classified hyperspectral imagers, shot the terror chief in the head after he refused to give up himself.

His body was taken to the aircraft carrier USS Carl Vinson, and was buried in the North Arabian Sea overnight - less than 12 hours after the raid, officials said.

The DNA from the remains provided certain confirmation that bin Laden was dead. He was 54.

The Cable News Network confirmed on Monday that bin Laden was shot in the head, and that three other men and a woman who were being used as a human shield were also killed.

Seventeen other people were said to have either been killed also or captured in the raid that gave Washington a tectonic victory in the 10-year war on terror touched off by 9/11.

Agency reports say that the fugitive must have been living in the house which was built in 2005 with his youngest wife, brother and other family members.

Another official said, 'Everything we saw, the extremely elaborate operational security, the brothers' background and their behaviour and the location of the compound itself was perfectly consistent with what our experts expected bin Laden's hide-out to look like.'

After watching the successful operation Obama said, 'The world is safer. It is a better place because of the death of bin Laden.'

Officials described Abbottabad, a city of about 60 kilometres north of Islamabad as a relatively affluent community, with lots of residents who are retired military.

'Bin Laden was living in a relatively comfortable place, a compound valued at about $1 million,' another senior US official told Politico.com

The fortified compound, surrounded by walls as high as 12-feet with barbed wire on the top to ward off intruders, was said to be far larger than other nearby homes and placed just 100 yards from a Pakistani military academy.

Two security gates guarded the only entrance and a third-floor terrace was shielded by a privacy wall. There were no phone lines or internet connection linking it to the outside world.

The US official added that 'many of his foot soldiers are located in some of the remotest regions of Pakistan and live in austere conditions.'

He said that Washington was convinced that the house had been built in 2005 to protect a major terrorist figure and came to the conclusion it must be bin Laden.

The raid was described as the culmination of years of highly advanced intelligence work that included the National Geospatial-Intelligence Agency, which specialises in imagery and maps, and the National Security Agency, the 'codemakers and codebreakers' who can covertly watch and listen to conversations around the world.

On June 2, 2009, just over four months into his presidency, Obama had signed a memo to CIA Director, Leon Panetta, stating 'in order to ensure that we have expanded every effort, I direct you to provide me within 30 days a detailed operation plan for locating and bringing to justice' bin Laden.

In the biggest break in a global pursuit of bin Laden that stretched back to the Bill Clinton administration, Washington discovered the compound by following one of the terrorist's personal couriers, identified by terrorist detainees as one of the few al-Qaeda couriers who bin Laden trusted.

'They indicated he might be living with and protecting bin Laden,' a senior administration official told reporters during a midnight conference call.

'Detainees gave us his nom de guerre, or his nickname, and identified him as both a protÃ©gÃ© of Khalid Sheikh Mohammed, the mastermind of September 11, 2001 attacks, and a trusted assistant of Abu Faraj al-Libbi, the former number three of al- Qaeda who was captured in 2005.'

The officials didn't learn the courier's name until 2007. Then it took two years to find him and track him back to this compound, which was discovered in August 2010.

Obama, who began planning for the raid as far back as March, said none of the Americans involved in the targeted assault was wounded.

The President gave the go-ahead for the Navy SEALs to go in on Saturday but due to bad weather, they switched to Sunday.

During his televised speech, Obama addressed those who lost loved ones during the September 11 attacks and said, 'We have never forgotten your loss nor wavered in our commitment to see that we do whatever it takes to prevent another attack on our shores.'

Obama used the address to reiterate that while the United States has been hunting the Al Qaeda leader in the Arab world for the past decade, and has waged wars on Afghanistan and Iraq, America is not at war with Islam or Muslims.

He said, 'We must also reaffirm that the United States is not -- and never will be -- at war with Islam. I've made clear, just as President Bush did shortly after 9/11, that our war is not against Islam. Bin Laden was not a Muslim leader; he was a mass murderer of Muslims.

'Indeed, al-Qaeda has slaughtered scores of Muslims in many countries, including our own. So his demise should be welcomed by all who believe in peace and human dignity.'