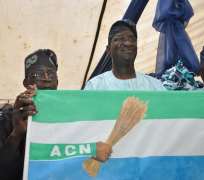 ABUJA, April 25, (THEWILL) - The Action Congress of Nigeria (ACN) has issued a final warning to the

Peoples Democratic Party (PDP) ahead of Tuesday's governorship/state House of Assembly election, saying any attempt to rig the election will earn the ruling party the people's wrath.

In a statement issued in Ilorin on Sunday by its National Publicity Secretary, Alhaji Lai Mohammed, the party said the people's anger will surely descend on anyone or party that attempts to thwart the will of voters on Tuesday.

It said the warning is particularly necessary because the PDP has been huffing and puffing about how it will capture Lagos state - which it has always inordinately set its eyes on in spite of the deservedly huge acceptance of the ACN in the state.

The plank of the PDP's bravado is that it will ride on the back of the 'victory' of President Goodluck Jonathan in the state in the April 16th presidential election.

ACN said the same warning applies to any of the states in which theparty (ACN) is poised to carry the day, barring any systematic rigging by the irredeemable PDP, especially Ogun, Oyo, Kwara, Akwa Ibom, Benue and Imo states, just to mention a few.

''What the people want is a genuinely free, fair and credibleelection. The seemingly free and fair poll so far, under the Modified Open Ballot System, has now been proven to be a facade in the real sense, since the poor oversight by INEC as well as Observers at the various levels of the collation stage has given room for the PDP to massively doctor or outrightly cook up figures,'' the party said.

ACN said it is now common knowledge that a former presidential aide, who is adept at doing dirty deals, has been dispatched to Lagos to bribe electoral officers with 200 million naira ahead of Tuesday's poll. It said, however, that no amount of money can force the people to vote for a party that can only reverse the much-acclaimed giant strides made by the Babatunde Fashola administration in the past four years.

''Our party is known across the country as a peace-loving party and a strong believer in the rule of law, that will rather resort to lawful means than street battles to wrest our mandates from those who steal them. But there is always the danger that unrepentant vote thieves may push their luck too far, thus eliciting a spontaneous response from the people.

''This will not augur well for a country that is still reeling from the effects of a similar conflagration in the north. Therefore, we will like to reiterate our warning to the PDP not to throw Nigeria into an avoidable crisis through their much-perfected but now very glaring systematic rigging plan, which they plan to re-enact in the South-West and elsewhere on Tuesday,'' it warns.

The party said presiding officers who were coerced to rig on behalf of the PDP in the first two elections have exposed some of the rigging strategies employed by the PDP to ensure anything but a free and fair election. The strategies include compromised Polling Officers deliberately invalidating ACN votes by smudging the ballot papers with their fingers; And making sure that the number of people accredited is less than the supposedly accredited voters, made possible by Polling Officers ticking off some names as accredited (before the start of accreditation) even though they were not present.

Other rigging strategies perfected by the PDP include making sure that the ballot papers available at polling units are less than what was given at the INEC office, a trick whereby the Polling Officer has removed some ballot papers in transit and given it to the PDP to go and thumb-print in a private house, and multiple voting.

''To the PDP we say: Let the peoples vote count. Let whoever will win on Tuesday do so fair and square! To Observers we say: Be more vigilant, think out of the box and show more interest in the collation of votes at every stage. And to all Nigerians we say: Take your destiny into your own hands. Vote wisely!'' ACN said.