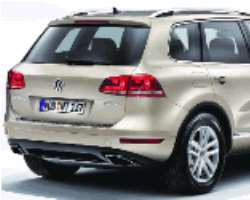 A huge discovery was made early this week when Daily Sun Motoring visited the showroom of the Volkswagen Centre in Gbagada, Lagos: Volkswagen has thoroughly improved its rugged Touareg inside and out, without a doubt giving the brand the unchallenged rights to call the product 'all-new'.

Like its Porsche Cayenne cousin, the 2011 Touareg in the showroom is sleeker and more modern in its design.

The standard LED running lights are pretty fresh, while other exterior features remind you of its other stable mate, the Audi Q7, with which it also has a lot in common.

The basic shape and proportions of the exterior have changed a little, while the body sides are now more sculpted than before, making it a bit more planted and sportier. At the front, the Touareg has picked up the new horizontal Volkswagen family face that debuted on the latest Golf and Polo.

The chrome that runs on both sides, at the rear (below the tailgate) and on the rim of the dual jumbo exhaust mouths, makes the exterior sustain its trendy look. It was also learnt that the 3.6 V6 petrol engine is retained, but is said to be more powerful in the latest version and works in tandem with the 8-speed automatic transmission specially designed for four-wheel performance.

Volkswagen Centre Marketing Director, Anurag Shah, who gleefully ushered the visitor into the opulent interior ambience of the new luxury SUV a few days later at the showroom in Victoria Island, disclosed that the initial batch brought in by his company, which is a member of the Stallion Motors, sold out in a matter of days, adding that the next batch expected to arrive soon, was already attracting the interest of the teeming Touareg lovers.

He explained that apart from being a top-class SUV (remember that at introduction some years back, Volkswagen aimed to place Touareg at the Range Rover level), Shah said that the array of features packed by both the Highline S and Highline SE, is a major factor in the positive response the vehicle has received so far.

The Highline S is imbued with a long, tempting list of features, even though the SE's seems to be slightly richer.

Fuel efficiency was of paramount importance in the redesign, and weight reduction plays an a key role. It is now nearly 460 pounds lighter than its predecessor. Overall the new Touareg is about 20% more efficient than before and 80% more handsome. To prove it is still the warrior it was born to be, the new Touareg was last February challenged by some test-drivers to defy the off-road odds across the Sahara desert. Needless to add that it stunned the Doudting Thomasses with its superlative performance.

Shah is of the opinion that the fast-lane ride of the 2011 Touareg, the incredible off-road ability and its rich features, are enough to send cold 'shivers' to the ranks of the competitors who have always respected the 'desert warrior'.