NFC EXCLUSIVE: MUSIC FROM “SOME WHERE IN AFRICA” 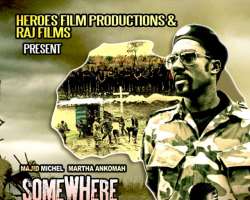 After watching the movie “Some Where In Africa “I can fairly say that, I have watch An African movie. Just have a look at the

Music video and the synopsis from the camp of Heroes Production and Raj films,producers of 'Sin Of The Soul', 'Heart of Men 'Pool Party ,'The Game' Etc

SYNOPSIS – SOME WHERE IN AFRICA

In a town where blood thirsty Militants subject the government to coup d'état, life is unpredictable. It's difficult to know when you will wake up to a brilliant morning sun which promises a day of solemnity, or a shimmering moon in which echoes the shouts of death.

In the wake of the seemingly normalcy of a capricious life, a new regime is established in Kimbala town; the superlative Military regime of Yusuf Mumbasa! Thirstier and fiercer than his predecessors, the people of Kimbala are dumb by his extreme ruthlessness.

The strongest of men are hit down to nothing more than a murmur; the influential are coiled in their shells in total stillness and the civilians hide behind the hypocritical facet of patriotism! Who will dare stop Mumbasa?! Widows cry, orphans wail and the whole town mourns in complete silence…!!!

In the time when a couple of determined souls uses a weapon that has no bullet or sharp edges to overcome Mumbasa and yet fail miserably, there arises a group of fearless combatants; a group of unstoppable young students who refuse to fall into the category of the coward! Their audacity is reinforced by their esteemed solidarity to seek justice for the family of their widowed vice principal, whose husband fell victim to the callous acts of Mumbasa. At this juncture, it cannot be told who is fiercer – the students or Mumbasa! But is that necessary, when all that matters is who wins at the end?! It is a war of fate, not only for the students, but that of Mumbasa as well….

Can these unarmed, inexperienced and relatively feeble minor students bring the well shielded wall of the fearsome tyrant down?! Time tells, but only the end of this story can give us the answer….