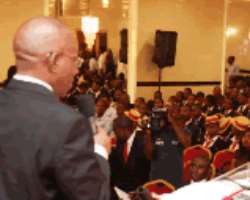 You would find it hard to understand how one person can pull such a large crowd of youths under one roof. They came in large numbers, in varying age brackets and most of them in their school attire.

They were all there for Dr. Jim Ovia, the former CEO and founder of Zenith Bank. It was the anniversary of his youth empowerment project: emotionally, he calls them 'my children' and with passion he cherishes their presence and was excited that there were so many of them around. To rub in this devotion to their cause in chiseling out some dignity even from the building block of those of them who are lacking in great pedigree, he called out to the gathering for an address by a beneficiary of his largesse. The young graduate who passed through the University of Benin is one of the 1000 that have gained higher education through Ovia's empowering campaign.

Because the Foundation is ICT targeted, the notice calling for participation urged intending participants to apply online. And to show their familiarity with the ICT rave and zest for the project, these thousands of youths indicated interest and were invited.

While regaling the audience with his exploits for the youths, one recalled the story of a little black boy in Everyday Greatness by Steven Covey who served in the train to pay his fees. He waited a white aristocrat who never gave a tip but got his details and his contact. On getting back to school, after resumption, he had $500 waiting for him from this publisher he served in train. That changed the life of the poor boy and he grew to a noble personality in the US later.

Guess what the society would have benefited in 20 years if Ovia continues at this pace in developing human resource for the nation? At the celebration of the feat of the group – Youth Empowerment and ICT Foundation championed by him after 10 years at The Civic Centre, Victoria Island, Lagos, the cream of the society gathered to identify with the youths who actually had the day.

The man behind the project, Ovia, in his opening remarks gingered the youths to stand up and be counted as their age is the right stage of life to make a powerful impact. He rolled out a long list of some of the most influential citizens of the world today who hit the limelight in achievements as youths and still remain there especially in the ICT - a major focus of the project. His instances included Bill Gates who founded the Microsoft at 20, Sergey Brin and Larry Page who were 24 and 23 respectively when they founded Google. He stretched his instances to include Michael Dell, founder of Dell at 19 and later David Zuckerberg, the man behind the latest IT and infotech rave - Facebook, who also attained his feat in his youthful age.

These men, he informed them have made both fame and fortune as they rate among the 50 richest in the world.

Through this project, Ovia has made available computers to even poor children who never dreamt of having one. Even at the gathering this week, some individual youths earned themselves personal computers with internet modems and free internet access for one year with the exception a girl of 14 who answered a question adjudged tougher than others by Ovia and had her internet access stretched to two years. But all the beneficiaries have their internet access renewable at every anniversary of the foundation.

'I want to specially commend some of my children here who came even uninvited. Such schools sent their children just to give the function a try. They were not among there schools accredited for the ceremony, therefore they were no arrangements to pick them up with the bus arranged for that. Although they could not even transport the children here, they all decided to trek down here and their decision will pay because the schools will get three computers each', he assured.

Of the 50 schools that attended, he promised that 60 percent of them would each get five units of computers with internet access while the rest will have theirs later.

To get the project right, the forum had in attendance outstanding personalities and motivational speakers to pep up the youths into positive action for their future. They included Mr. Akin Kekere-Ekun, the Pro Chancellor of LASU, former Unilag VC, Prof. Ibidapo Obe, Dr. Ndidi Edozien, a motivational speaker and NGO personality and also the lady behind bellanaija.com blog site, Uche Eze who herself is also a youth. These persons joined in kick-starting the young ones into action and to stir them the latent force in them that would make them great citizens of the nation and the world and to possibly do to the younger ones when they are grown more than they got from the benefactor, Ovia.

Because of the importance of the project to make these youths ICT compliant, President Goodluck Jonathan who could not make it to the ceremony sent a representative, the Permanent Secretary of the Federal Ministry of Youth Empowerment, Alhaji Baba Umaru Faruq to stand in for him. Jonathan's speech to the young ones was in line with the intent of the project - to make the young ones realize their potentials and follow it with positive action in order to make the nation greater through them.

He said: 'The digital or new economy is about the application of ICT to drive economic activities in all sectors of the human society. It is about online file and data sharing, social media and attendant economic exchanges, entertainment promotions and marketing, news marketing and advocacy.'

He also challenged the youths not only to 'be on the web to browse. You must browse to learn and equip yourselves with new skills. So every minute you spend on the web must be a rewarding one. This can only be achieved if you focus more on marketing opportunities, e-book writing skills and many more.'

With a gathering that rich, the youths smiled home with new ideas and knowledge on how to face tomorrow while their benefactor left happier that his dear project has been taken a step further in achieving the intention. He left them with a promise to do more, especially if they keep giving him the feedback that his efforts are complimented by their better grasp of the essence and place of ICT today and improving on their minds to be better and greater with a proper focus about their future.