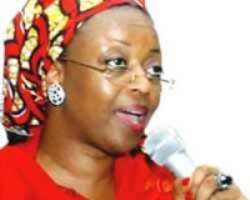 Targets 10b cubic feet by 2020
A MAJOR plan to fast-track Nigeria's industrial rebirth through a gas revolution anchored on the construction of two world scale petrochemical plants, two fertiliser plants, five fertilizer blending plants, a methanol plant and a Liquefied Petroleum Gas (LPG) distribution plant, is set to be unveiled by the Federal Government.

President Goodluck Jonathan will this week launch the gas revolution agenda that would position Nigeria as the undisputed regional hub for gas-based industries.

Speaking in Abuja yesterday on the ambitious plan, the Minister of Petroleum Resources, Mrs. Diezani Alison-Madueke, said the agenda would spread industrialisation, create wealth rapidly and generate up to 700,000 new jobs in both gas plants and agricultural industries that will spring from the initiative.

She stressed that Nigeria through the agenda would move its gas production figure which stands at one billion cubic feet per day (cfpd) to over 10 billion cfpd by 2020 which is in strict realisation with the 2020 economic development agenda.

Alison-Madueke noted that to realise the goal would require radical review of how the nationwide gas potential is harnessed.

Providing details of the Federal Government's gas-driven industrialisation agenda, which is billed to be launched on Thursday by the President, Mrs. Alison-Madueke said the petrochemical and fertiliser projects, which will attract over $10 billion Foreign Direct Investment between 2012 and 2014, would have a huge impact on the Nigerian economy.

'Globally, the petrochemical value chain is known as a major creator of employment. Based on our planned investment in the 1.3 million tonne per annum capacity petrochemical plant, it is estimated that over 200,000 direct and indirect jobs will be created,' the minister explained.

Speaking further on the economic benefits the gas-to-fertiliser project, Alison-Madueke stated that the fertilizer plants are strategically planned to impact positively on the agricultural sector to create agricultural revolution that would make food available and affordable to millions of Nigerians.

'More importantly, however, is the explosion in employment creation that will arise from the boost in agricultural productivity and the related agro and food processing industries that will emerge. Over 500,000 jobs are estimated from this agriculture-related agenda as well as an attendant increase in the nation's GDP', she added.

In order to meet the gas need required for the massive industrialisation programme of the administration, the minister reiterated the Federal Government's decision to intensify exploration for hydrocarbons in the inland sedimentary basins consisting of Anambra Basin, Bida Basin, Dahomey Basin, Gongola/Yola Basin, Sokoto Basin, the Middle/Lower Benue Trough and the Chad Basin, using the latest seismic technology including electromagnetic surveys.

'By enhancing the prospectivity of these basins, we hope to build significant supply bases across the various geo-political zones that complement the existing gas supply centres in the Niger Delta', she stated.

Alison-Madueke further explained that besides the critical Calabar-Ajaokuta-Kano gas pipeline proposed to link the existing gas zones to other parts of the country, additional spur lines originating from the envisaged new supply centres in the inland basins are planned to enhance the growth of local supply and consumption.

Her words: 'Mr. President has set an ambitious gas agenda that will be launched on Thursday. Mr. President has a strong vision and passion to re-industrialise Nigeria using this vast natural resource that the country is so richly endowed with. The delivery of his vision is anchored on a few key cardinal principles which are: significantly improve power availability for all; re-positioning of Nigeria as the undisputed regional hub for gas-based industries such as fertilizer, petrochemicals and methanol; and a geographically spread industrialisation, creating wealth rapidly across the nation.'

She explained that to grow the gas at the estimated pace, there is the need for gas flexibility and supply base which call for the strategic development of various inland basins, in addition to the Niger Delta and offshore basins.

The minister also revealed that over the next five years, government would be prioritising about $1 billion on further seismic data gathering, aeromagnetic surveys, exploration and appraisal drilling.

'By enhancing the prospectivity of these basins, we hope to build significant supply bases across the various geo-political zones that complement the existing gas supply centres in the Niger Delta.'

Base on the ambition, Alison-Madueke submitted that the current pipeline infrastructure which is anchored around the Calabar-Ajaokuta-Kano line will be further complimented by a network of additional spur lines originating from the new supply centres in the inland basins to enhance the growth of local supply and consumption. The critical gas pipeline, she disclosed, will cost about $2 billion and that focus on its rapid delivery is on-going.

She highlighted that the creation of sustainable gas platform for investment in gas supply growth through revised commercial framework for gas has resulted in gas supply to power generation.

She added: 'For the first time in several years, we are now in a position of net surplus in gas availability relative to the requirements of the power sector in the short term. We have about 150mmcf/d surplus supply potential currently which can very quickly add about 500 megawatt to the current generating capacity on the national grid. We will consolidate on the gains in power with further growth in supply development and delivery of critical gas infrastructure such as the Ob/Ob-Oben line, Calabar-Ajaokuta-Kano line. Base on our on-going supply development effort, we expect to have over 2.5 billion cfpd of gas supply destined specifically to the power sector, supporting significant additional capacity by 2014. By 2020, we would be looking at a supply capacity of about 10 billion cfpd for the power sector, in line with Mr. President's target for Vision 20: 2020 of 40 gigawatt.'

She stressed that the combination of the planned investment will in one swoop result in the most significant in-flow of Foreign Direct Investment of over $10 billion between 2012 and 2014 when all the plants are expected to be functional.

Other dignitaries present at the event include the Permanent Secretary of the Ministry of Petroleum Resources, Goni Sheikh, the Group Managing Director of the Nigerian National Petroleum Corporation, NNPC, Austen Oniwon and other top officials of the NNPC.