THE WESTERN MEDIA SHOULD LOOK AT NIGERIA BEYOND 419----Kanayo O. Kanayo 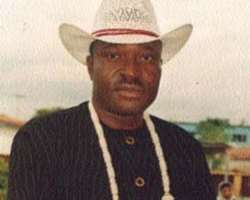 Having lost the bid to represent Ahiazu/Ezinihitte Mbaise Federal Constituency in Imo State at the House of Representatives in January, actor, Kanayo O Kanayo, was expected by his peers, colleagues and fans to go nurse his wounds, at least for a while.

However, undeterred by his losses, the actor turned politician is still very much alive in the political scene.

His latest publicity stunt is a video of the Build up Nigeria project, series 12 currently on social networking sites. In the question and answer series, the artiste shares his view about Nigeria's image and other issues.

“Let me start from my own industry; from nowhere, from nothing, we built a product, which has gone very far in letting people know who we are and how we think. The selling point is that we are selling our own stories ourselves. This is one product that has been acclaimed as the second largest movie industry in the world. We started from nothing and we were able to create it with that Nigerian spirit. It is the Nigerian spirit that has been driving a whole lot of things,” he said.

Donning a hat with the inscription of Goodluck Jonathan, the actor went on to talk on the need for the western media to give Nigerians a chance to say who they really are.

“First of all, I think the western media should look at Nigeria beyond 419 and all these stereotypes. We have gone beyond that. Let's look at ourselves from the reform era of 1999 to what we have now. The question is, can you name any African nation or developing nation who has been able to offset its debt to the western world. Nigeria has been able to offset its debt. That is a plus. And that shows we are a people of commerce, we are a land of commerce,” he said.

Born Anayo Modestus Onyekwere, March 1, 1962 in Mbaise, Imo State, Nigeria, KOK won the African Movie Academy Award for Best Actor in a Leading Role in 2006. With over 250 films to his credit, Kanayo made his debut film appearance in Nollywood's first major film Living In Bondage in 1992.