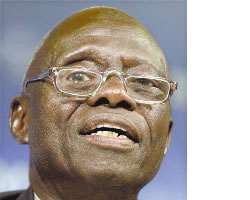 Mall. Adamu Ciroma
The alliance being worked out by President Goodluck Jonathan and the Adamu Ciroma-led Northern Political Leaders Forum [NPLF] might have suffered a serious setback with the arrest and detention of Malam Bello Abdulkadir and Alhaji Bibi Farouk, both secretariat staff of the NPLF by the State Security Service [SSS]. Abdulkadir who was said to have been invited to the headquarters of the SSS in Abuja on Wednesday morning was joined by Bibi Farouk, former National Youth Leader of the PDP, who was said to have been invited by the security agency yesterday. Both men were still being held as at press time.

The arrest came less than 24 hours to the meeting of the NPLF, which was expected to take a final decision on whether or not to support President Goodluck Jonathan in the April presidential polls.

Though the meeting held in Abuja yesterday, there was no official statement regarding the outcome.

Member of the group Malam Bashir Yusuf who confirmed the arrest said the incident was in 'bad faith' and 'tells a lie to President Goodluck Jonathan's attempt for rapprochement with the NPLF.'

Abdulkadir had served as secretary of the nine 'wise men' who worked out the consensus arrangement that produced former Vice President Atiku Abubakar as consensus candidate of the north for the presidential primaries of the Peoples Democratic Party [PDP] while Bibi has been an active member of the NPLF secretariat.

The two men are also believed to be very close to former military president Ibrahim Babangida.

Sources in the NPLF said the latest development has thrown a spanner into alliance talks between President Jonathan and the northern leaders who were working to find a common ground ahead of the presidential polls.

The two sides have been bitterly divided over the issue of zoning and rotation of the presidency as enshrined in the PDP constitution and agreed by stakeholders at a caucus meeting attended by Jonathan in 2002.

President Jonathan early last month met with the Ciroma group at the Abuja residence of the former Minister of Finance, signalling the beginning of a rapprochement between the leaders of the NPLF and President Jonathan.

Daily Trust learnt that operatives of the SSS accosted the NPLF Scribe in Abuja.

But Abdulkadir insisted on being accompanied by a lawyer which he quickly arranged, after which he was taken to the 'Yellow House', the headquarters of the SSS in Asokoro, Abuja.

Speaking further, the source said, 'At about 10pm yesterday [Wednesday] night when it was clear that Abdulkadir would not be allowed to go home, operatives of the SSS handed over the telephone handsets of the Secretary of NPLF to his lawyer who had escorted him to the SSS office.'

As at yesterday evening, lawyers were trying to file a bail application on behalf of Abdulkadir in line with constitutional provision that a citizen should not be kept in detention for more than 24 hours without being charged to court.

Meanwhile, the spokesperson of the SSS, Marilyn Ogar said Abdulkadir's invitation has nothing to do with his membership of the Ciroma group but in connection with some security issues, which she did not disclose.

Though she said she was not aware of Faruk's arrest, she said if they are found not culpable after investigation, they would be released.