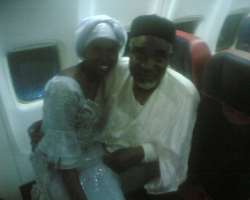 Adamawa's dictator governor, Murtala Haman Yero Nyako has so far spent over N100million from the state resources on teenage girls for fun and sometimes travelling with them to as far as the United States and Germany where there will be absolute 'secrecy'. As a result, according to a very credible insider, two of the governor's teenage girl friends are now university dropouts as they could not concentrate in their studies because they are always with the governor everywhere he goes either officially or privately.

One of the victims of Nyako's unbridled sexual life, a seventeen year old Aisha B. Dauda, whose exclusive picture with Nigeria's oldest governor, seating on his lap in a chartered aircraft to the United States (see photo above) clearly demonstrate how irresponsible Mr. Nyako is and how he has wasted Adamawa's resources over the years to enjoy himself at a time his people are dying of cholera, malaria, poverty and other curable and preventable diseases.

Bills/expenses of the chartered plane to US, hotel, logistics and money for shopping for Nyako's fun with his girlfriend was borne by the Adamawa State Government. This exclusive picture with teenage Aisha and many other nudity scenes that were later taken in Nyako's hotel room had not only exposed the recklessness and lack of moral values of an old man but how he wasted state resources at a very difficult times to 'enjoy' himself and destroy the lives of girls old enough to be his grandchildren.

Investigation reveals that poor Aisha whose photo you are seeing with Mr. Nyako could not complete her secondary education due to consistent demand of her services by Nyako. Aisha, who lives at Unguwan Rimi in Kaduna, had spent most of her time travelling to Abuja, Jimeta or the usual foreign trips abroad with her sugar daddy, Nyako to the detriment of her educational career. While he was busy destroying the life and future of Aisha, Mr. Nyako's children have either graduated, undergoing their masters programme in some of the most expensive schools abroad or working.

Mr. Nyako's notoriety has earned him the very opposite of a man supposedly responsible to the people of Adamawa, his home state and to his oath of allegiance and office even as his insatiable lust for teenagers remains timeless.

The exclusive pictures in nudity he took with Aisha and some of his other encounters with underage girls in hotels/guest houses in and outside Nigeria speak volume for themselves. Some of these pictures of Nyako's unbridled sexual life were taken by Aisha's friend who accompanies them to US. Despite his unrelenting determination to rule Adamawa state by all means Nyako, apart from his age and being among the elders of the North is already married to four wives with children and many grandchildren.

Some of his contemporaries, who are upset with his style of governance, say that Nyako is a highly ambitious and greedy politician, who has sold out his conscience and integrity for President Goodluck Jonathan and thereby betraying the northern agenda based on PDP zoning agreement. Sadly enough, Mr. Nyako is not only one of the most extravagant governors in Nigeria today but one that has legalised corruption by a clique and members of his family through unprecedented looting of the state treasury and saddled with very poor performance.

Nyako is arguably, by this revelation of wanton sexual urge, the worst governor the people of Adamawa ever had and yet the first regime in Adamawa's history that got higher statutory allocation from the Federal Government, running into billions of naira with nothing in terms of projects to justify the huge allocation.

Mr. Nyako rightly runs what people of Adamawa called government of his family, business associates, in-laws and a few clique. Now that technocrats like Bello Tukur have resigned from his government to contest for the senate, the moral crises for the government will even be worse.

Nyako's poor performance as governor of Adamawa and his wanton mismanagement of the state resources is still being lamented by the citizens of the Sun Shine State coupled with how he allowed his family members to manipulate the resources of the state through bogus projects and over inflated contracts.

Pundits query why this controversial governor of Adamawa State and unarguably the oldest governor in Nigeria today have resorted to dating teenage girls by using millions of naira from the state resources to attract them and eventually destroy their future.

There would be another story on his scandalous nudity clips.