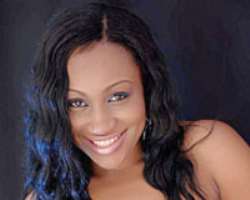 Nollywood diva Ebube Nwagbo added a year on (Thursday) yesterday and to mark the occasion, she took to the streets  to celebrate with the beggars.

An elated Ebube, who only last year joined the growing ranks of top celebrities who own branded products in their names by unleashing a 100 per cent human hair known as Posh Hair, gave out gift items to the beggars on the streets of Lagos.

Thereafter the actress organized a superlative birthday bash for her friends, where champagne were popped in the spirit of the celebration.

'I'm marking my birthday anniversary with beggars on the streets of Lagos, on Thursday. I am going to share love with them. Thereafter I will organise a proper birthday bash for my friends.'Ebube said in a text message to HVP Thursday night.

Pretty Ebube who has paid her dues in the industry raised her status also last year as she joined the league of the few Nollywood actresses that cruises town with a Hummer truck. The arrival of the new bride, H3 as the truck is also called generated heat in the industry as many raised eyebrow.