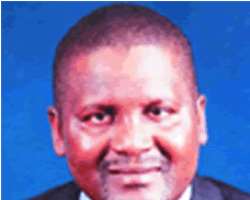 Dangote
The Sun Board of Editors had voted Dangote and Goje as the most outstanding personalities in 2010 for their enviable contributions in the private and public sectors respectively.

The board decided that the cap fits Dangote and Goje after an exhaustive debate on a shortlist of eight nominees.

The President of Dangote Group towered above others on the list with his unrivalled strides in the nation's economy. Beyond being the first Nigerian to create an international conglomerate and the highest employer of labour outside government, Dangote brought his companies to the capital market in 2010.

The Dangote Group, which Dangote sat atop as president, was noted as having an unmatchable contribution by any singular Nigerian company to the stock market and the economy.

Governor Goje had emerged as first runner-up of The Sun Man of the Year for 2009. He was selected as co-winner for 2010 after a careful consideration of his landmark achievements in education, healthcare, provision of water through building of a massive dam over River Gongola and the construction of a new airport.

The Sun Man of the Year Award was initiated in 2003 as the company's way of honouring Nigerian patriots whose public conduct and actions help to inspire hope for a better Nigeria.

The maiden edition produced business mogul and Chairman of Globacom, Otunba Mike Adenuga (Jr) as the first winner for introducing the per second billing in the nation's telecoms industry.

For his dogged fight against corruption, Mallam Nuhu Ribadu, former chairman of the Economic and Financial Crimes Commission (EFCC) picked the 2004 version.

Former Central Bank of Nigeria (CBN) governor, Prof. Chukwuma Soludo, won the 2005 edition for his sweeping banking reforms, while former minister of education, Dr. Obiageli Ezekwesili, came tops in 2006 for introducing reforms in the education sector. In 2007, Governors Peter Obi and Rotimi Amaechi of Anambra and Rivers states respectively, were honoured for their commitments to the rule of law in their quests to win back their 'stolen' mandates.

In 2009, Lagos Governor Raji Fashola's refreshing contributions to governance in the state won him the diadem alongside GTBank's Managing Director Tayo Aderinokun for running one of the best-managed banks in the country.