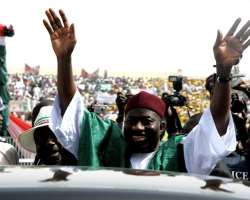 PRESIDENT GOODLUCK EBELE JONATHAN WAVES TO SUPPORTERS DURING HIS CAMPAIGN TOUR IN KADUNA A FEW DAYS AGO.
Listen to article

ABUJA, Feb 16, (THEWILL) – President Goodluck Jonathan today appealed to the Senate to pass the Money Laundering Prohibition Bill and the Anti-Terrorism Bill urgently. It was the third time he would do so through a letter to the President of the Senate, Senator David Mark.

In a third letter to senators read on the floor of the Senate today, the President appealed to them to expedite action on the two bills and pass it into law since the bills have passed the committee stage and has been read twice on the floor of the two chambers; Senate and House of Representatives.

To do so he said will have the effect of reassuring the international community of Nigeria's unwavering commitment to the global fight against money laundering and international terrorism.

The letter dated February 14, 2011 and obtained by THEWILL reads in part; "Further to our discussion on the above subject matters, I wish to once more crave your indulgence to request for expeditious consideration and passage of the two bills listed above currently pending before the distinguished Senate.

"Mr. President, we have gained some positive mileage through meaningful engagement with both the Financial Action Task Force (FATF) and the International Contact regional Group (ICRG) on the commitment of our nation to adapting international best practices in financial transactions. The endeavor enabled us to get delisted from the list of non-cooperative nations.

"Since the vital Bills have passed the committee stage, and been read twice on the floor of the two chambers, it is my hope that we will make the final push to ensure their expeditious passage. This will have the effect of reassuring the international community of Nigeria's unwavering commitment to the global fight against money laundering and international terrorism".

Recall that President Jonathan has continued to remind lawmakers of the essence of the two bills and the need for early passage. So far the bills are held up at the committee stage.