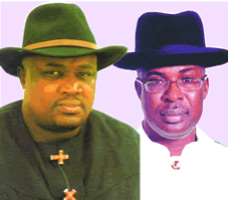 •Ebebi and Gov. Sylva
There was confusion in Bayelsa State yesterday over the Court of Appeal ruling quashing the impeachment of Mr. Peremobowei Ebebi as the deputy governor of the state. The House of Assembly with a two-third majority had in June 2010 impeached Ebebi over alleged gross misconduct.

Before his impeachment, Ebebi, through his counsel, Kemasoude Wodu, had dragged the House of Assembly before a Yenagoa High Court, praying the court to stop moves to impeach him.

The presiding Judge, Justice Doris Adokeme had struck out the case, noting that the court had no jurisdiction on the matter, forcing Ebebi to head to the Court of Appeal to challenge the decision of the court.

With the decision of appellate court, Bayelsa State now has two deputy governors just like what obtains in Bauchi State where the court also nullified the impeachment of the Deputy Governor Moahammed Garba Gadi. At the resumed hearing of the case on Wednesday presided over by a panel of three justices, led by Justice Dantijo Muhammed, the Court of Appeal nullified the impeachment of Ebebi by the House of Assembly.

According to him, the judges agreed with the prayers of the respondents and ruled that the case should be returned to the state High Court for retrial by another judge.

'The High Court struck out our case, saying it does not have jurisdiction and that was what led us to the Appeal Court. At the Appeal Court, the court agreed with our submission and ruled that the High Court has jurisdiction. He referred us back to the High Court for retrial by another judge. 'Meanwhile, it set aside and nullified the impeachment of Ebebi noting that the House of Assembly ought not to do anything on the matter since the matter was in court'

Investigations revealed that the legal team of the Bayelsa State House of Assembly and the state government were shocked by the judgement and were making frantic efforts to get the certified true copy of the judgment to study it.

The Senior Special Assistant to Governor Timipre Sylva, Mr. Preye Wariowei, who also doubles as the press secretary to Seibarugu, said there was nothing like reinstatement of Ebebi. Close aides of Seibarugu said he was unruffled and was going about his constitutional duty as the deputy governor.