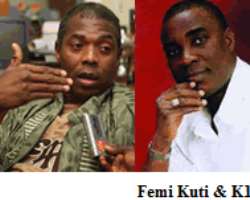 The University of Ibadan campus and Trans Amusement Park, Agbowo, Ibadan, Oyo State, will from March 22 to 25, 2011 play host to Grammy award nominees Femi Kuti and King Sunny Ade, as well as King Ayinde Marshal, 2face, Ice Prince and a host of other artistes who are billed to give an exhilarating

The historic carnival, which will attract participants from Benin Republic, Togo, Ghana, Serria-Leone, Cameroun, and Niger Republic, comprises a series of events that will hold simultaneously on two customized stages; bringing back the old glorious moment that the Havana is known for.

In addition to this, there will be a mentoring session, free medical tests, career guidance and counseling, sponsor's exhibition, walk/work for hope (advocacy/painting of old buildings in Ibadan city, and cleaning of drainages by students), Havana musical concert plus Miss Havana and Mr. Macho.

Sigma Club, the organisers of the event and their partners are working tirelessly to package a show that would shake the ancient city of Ibadan to its foundation. According to them, undergraduates across the country have started making enquiries about attendance and purchase of Miss Havana and Mr. Macho beauty pageants' forms in order to participate.

Similarly, 'okada' riders, and commercial buses have expressed desire to participate in the awareness campaign. Hotels in Ibadan are making enquiries to host the Miss Havana contestants and the A-list artistes. While students across the country are warming up to receive the Havana train which may take off any moment soon.