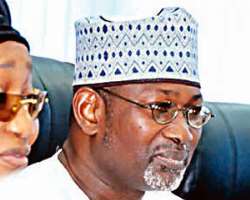 INEC Chairman , Prof. Attahiru Jega
The reversal of severaldecisions by the Independent National Electoral Commission in the final list of candidates for the April general elections has become the norm in recent times. JOHN ALECHENU writes that the confusion being generated will further heat up the polity.

As a departure from the arbitrariness that characterised decades of military rule, judicial pronouncements have, since the return of democracy in 1999, restored the hope of Nigerians in the rule of law. This has, to a large extent, helped in deepening democracy as more and more Nigerians, who feel aggrieved now approach the courts to seek redress.

The political class has arguably been the largest beneficiary of the magnanimity of the judicial process. Examples abound of stolen mandates being restored and wrongful removal from office being reversed, thus improving Nigeria's image in the comity of nations.

However, the rash of court injunctions and restraining orders being served on the Independent National Electoral Commission in respect of the list of candidates standing for elections in April 2011 is beginning to threaten these gains.

At the last count, the INEC Commissioner in Charge of Legal Services, Mr. Philip Umeadi Jnr., confirmed the receipt of 64 court orders and counter-orders compelling the commission to recognise the name of one candidate or the other.

Umeadi said, 'As at today, orders are still being served and information available to us from some courts indicate a number of cases are waiting to be assigned to judges, which would be heard and of course, ex-parte orders compelling INEC to do one thing or another would be expected.'

Umeadi, like several other stakeholders in the country's political firmament, expressed fears that should the situation be allowed to get out of hand, the threat to the April 2011 polls would gravitate towards reality.

He said, 'The fear that the avalanche of court cases can derail the April elections is real. Five days after the close of the date of nominations, we're still receiving court orders and counter-orders with respect to who the candidates are.'

It is worthy of note that by INEC guidelines, candidates for elective offices must of necessity emerge through a democratic process.

In the case of the type of democracy Nigeria subscribes to, aspirants are expected to pass through party primaries from where a winner is expected to be named as the party's candidate.

The Electoral Act 2010 (as amended) stipulates that candidates should emerge from primaries, which must be monitored and given recognition by INEC.

But the recently-concluded party primaries were as rancourous as they came.

In some states, there were parallel congresses. In others, it was a matter of inconclusive primaries. Yet in others, congresses were held but persons who did not win had their names forwarded to INEC.

Some aggrieved aspirants went to court and obtained injunctions to either compel INEC to recognise them as candidates or prevent the party or their agents from substituting their names.

But the revised timetable released by INEC was specific on the timeline for every activity.

Political parties sponsoring candidates for the April 2011 polls were to submit forms CF001 (Affidavit &Personal Particulars of Candidate(s) & CF002 (Party List of Candidate(s) for all elections on or before January 31, 2011.

True to type, most of the political parties waited until the last day to approach the commission with their lists.

As at January 31, when the exercise closed, 40 out of the 63 registered political parties had complied with the deadline, while 20 were left out.

Some of the 20 political parties petitioned INEC, alleging unwholesome practices by the employees of the commission.

This subtle blackmail - it is so in some circles - perhaps made the electoral body into re-admitting 12 out of the 20 that were initially locked out for failing to meet the deadline.

Rather than douse the tension, the submission of lists by political parties further raised the stakes.

The lists submitted by some of the parties generated a fresh round of controversy.

Arguably worthy of mention is the controversy generated by the cases in Ogun, Oyo, Enugu, Katsina and Kogi states.

In Ogun, it was an all-out political struggle between a faction of the Peoples Democratic Party loyal to former President Olusegun Obasanjo and that loyal to the incumbent governor, Otunba Gbenga Daniel.

The Daniel-led faction of the party forwarded the names of Gboyega Isiaka and Lola Abiola-Edewor as the governorship and Ogun Central senatorial candidates respectively.

Before the lists' issue became public, it was learnt that the one from the Daniel faction was the one submitted by the PDP headquarters. A contrary information also from the grapevine said it was Obasanjo's.

Mr. Kayode Idowu, the Chief Press Secretary to the INEC chairman, Prof. Attahiru Jega, tried hard to shield the commission from the crisis, which was brewing at the time.

Asked to comment on which list from Ogun State was before the commission, Idowu had said, 'I'm aware that collation is ongoing and not yet concluded. The best thing to do is to wait till it is concluded and the official list made public.'

Not long after this, INEC confirmed the receipt of a court order from the Obasanjo-backed faction and proceeded to recognise it.

A similar scenario played out in the case of the lists from Oyo and Anambra states.

The list from Oyo, which had the incumbent governor, Adebayo Alao-Akala on it, was first rejected by INEC but subsequently reconsidered barely 24 hours later.

Although no reason was given for this, it was gathered that pressure was brought to bear on the commission from the governor, who at that time, had a convincing argument.

The publication of the list of party candidates beginning from February 6 threw most political parties and candidates into a frenzy.

The case of the governorship candidate of the Congress for Progressive Change for Kano State, Alhaji Mohammed Sani Abacha, attracted mixed reactions from the parties involved.

While the party's national chairman, Prince Tony Momoh, accused the electoral body of tampering with its list, Abacha and his backers hailed INEC for upholding the rule of law.

The INEC monitoring team, which witnessed the CPC governorship primaries in Kano, reported that Abacha, who incidentally is the son of the late military dictator, Gen. Sani Abacha, won with the highest number of lawful votes.

The party, in its wisdom, allegedly submitted the name of Brig.-Gen. Lawal Isa (retd.) as its governorship candidate, a situation which sent Abacha to court to seek redress.

Umeadi defended INEC's position in the matter. He said, 'Our responsibilities remain that upon the publication of those particulars, we can now receive complaints about arbitrary substitution of names by political parties.

'That we can deal with in-house because we have our reports about the primaries of political parties, which we conducted and the Electoral Act gives us ample rights to refuse to accept candidates emanating from primaries that we, in our opinion, feel did not conform with democratic practices.'

A dramatic twist was added to the whole drama after the publication of the names of the incumbent governors of Enugu and Oyo states, Sullivan Chime and Alao-Akala.

The electoral commission had a rethink and announced a few days later that the publications were done in error.

This, Umeadi explained, was because there were subsisting litigation over their candidature.

He said in the case of Enugu, 'By the time the judgement was served on us, we had received the nomination list for Enugu State.

'Ideally, in deference to that judgement, we ought not to have published it, so that publication was an error and that was why it was removed.

'The same thing happened in Oyo State, where there was also a judgement with respect to the governorship slot. That again, was published in error.

'We had so many judgements and I tried to explain the rationale behind the ongoing exercise, when I spoke recently.

'The Forms 001 and CF002 are merely forms, which candidates the political parties intend to sponsor for the election submitted to INEC.

'We have now taken these forms to their constituencies, published them in the constituencies for the constituents to know the particular candidates in order to raise objections with respect to their qualifications for the respective offices, which they intend to contest.'

Interestingly, a former Deputy Speaker of the House of Representatives, Chibudom Nwuche, blamed political parties for the confusion in the polity.

He said, 'Litigation and the declining state of the electoral processes are as a result of the failures of the parties to entrench internal democracy, leaving party members with no option than to seek judicial interventions.

'I see the role of the court as one to save the polity because if people have been short-changed by an undemocratic party process that has thrown up the wrong candidates, whether as a result of the determination by certain people to take away the desires of Nigerians to freely elect people they want to represent them, or for these people to begin to appoint members of the National Assembly for instance, the option available to the law-abiding politician is to go to court.

'The litigation, as many as they may be now, are symptomatic of the problems of lack of internal democracy in the parties.

'If people lose in free and fair party primaries, they will not go to court. But where people sit down in cosy offices and decide who will represent the masses at the national and state houses of assembly, these things will happen.

'The courts are doing what is proper by reversing those arbitrary decisions.'

Whether the legal battles will advance the cause of the electoral process or thwart it remains to be seen, even as Nigerians look forward to free, fair and credible elections in April.