My man must be big enough to hold me – Zara 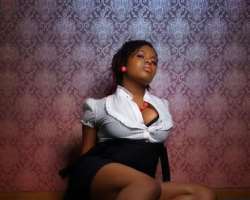 Oluwatoyin Joseph is a bundle of fun. Playful and intelligent, Zara, as you know her, lets her hair down talking on her kind of man, her thoughts on marriage and why she may never get pregnant.

In this engaging chat with Lolade SOWOOLU, the ex-Alapomeji Record artiste speaks on her music, admitting that 'the brand, Zara is not exposed enough for an album yet'.

She bought a round trip ticket she didn't need when she journeyed to Nigeria in 2009 to explore her music talents, after living in the United States for a decade.

The once engaged to be married chubby beauty hasn't looked back since taking on music professionally. Armed with three singles and two videos, here's Zara Grett for your weekend delight.

Zara's the artiste; Ejiro's the girl you hear on radio. I can't be Zara working at the station, it won't make sense because tomorrow I might want an interview as Zara. In fact right now Zara has a last name – Grett. It's from my birth name, Magaret.

The surname is just to create a name that stands out because I'm not the only Zara in the world. Since we're planning on going global, it only makes sense that I take on an added name so I'm now Zara Grett.

What's your real name in full?

How do you prepare for a show?

I sing a lot in the car on my way there and all that. I'm a rapper and singer and I love to have fun. I'm like a bowl of salad rather than a pot of stew.

How does a bowl of salad differ from a pot of stew?

In a pot of stew you don't get to see all the ingredients. But with salad, there's expression for each component.

Now I get it. So how do you come about your songs?

I don't freestyle, I write. I pick on a topic and create a story around it. Sometimes if I hear a beat that gets to me, I'd write something. I learnt to 'show' and not 'tell' from my English teacher in eleventh grade. When you personify feelings or a topic, it gives it a human face.

What's that weird sound you make in your songs?

Don't make me do it (laughter). It's an ape call. I am part of a sisterhood in the States that is tied to a fraternity. And it's in this fraternity that they make the 'ape call'. I do it on every track that has to do with Zara. I don't make faces. I make sounds and it works for me.

You were signed on to Alapomeji Records. What happened to the agreement?

Yes, Alapomeji Records released my 'Flyest' (a single) video but we just decided after evaluating things, that it'd be better for us if we worked independently of each other.

How long was it supposed to last for?

The contract was very clear on the terms for leaving. I didn't just opt out or something. We reached an agreement to part ways. Right now, I'm an independent artiste and I'm working very hard. I'm managed by Toni Payne Concepts.

What's happening with the album?

It's still being put together. At the same time I don't think I'll be releasing an album in the next six months. I'd like to allow more publicity for the artiste Zara before I take that step. So many people have released their albums prematurely because people keep asking, 'Is your album out?' There's no rush about it. The brand, Zara, is not exposed enough for an album yet.

What were your expectations and why did you buy a round trip ticket?

The ticket was cheaper (laughter). But seriously that way I didn't have to lie to my mum because she didn't want me coming in the first place. She had heard so much of bad news and was afraid.
I didn't even really have any expectations. I was just coming to give music a shot and I never used the ticket back.

Is Abokoku a true life story?

It's so many people's lives' story.

Is Zara a lover girl?

Zara is an emotional and tough person at the same time. I've heard people say I pretend to be
tough. But the thing is we're all humans and so we have our sentiments and that's why I carved the song 'Abokoku'. It refers to something some people have or wish they had, or that they have lost.

It could be love between a man and his God, love in the family or love shared between a man and a woman. I just didn't want to go the typical 'I love you' fashion. Again I borrowed a leaf from Shaggy's 'Mr lover lover' to say 'I'll wait for my lover'.

And is Kenneth really the lover or just a model in that video?

Kenneth is my homeboy. We met sometime somehow and when it was time for the video I thought he'd be perfect. Plus he looks great and I didn't want a yellow boy.

What do you have against 'yellow' boys?

Nothing. But darker boys look sexier. My ex was a very 'yellow' boy – he was Igbo. But there's just something about dark chocolate. I don't like to eat dark chocolate but I like to look at it.

So the guys now know the basic requirement …
I have no requirements o. Don't go and colour your skin o (laughter). If you must know, I like tall guys too. I'd like someone taller than me like 6′ 2′, 6'4′. Way taller, lean and fine. By lean, I mean with enough build to hold me because I'm not small. It also doesn't mean I want a bouncer.

So is all these the reason you're not in a relationship presently?

That's not why. It's just that I'm working; I'm busy. I'm not even looking. If I happen to meet somebody that I click with the right way, I won't be an idiot that shoots herself in the foot saying 'no relationships yet'. At the same time I won't sit outside or go to church hoping to find a husband.

What do you think about marriage. Is it something you look forward to?

I'm not excited about marriage. I don't even think across those lines. Some people think I'm getting old and I tell them 'if anything's supposed to happen, it will happen anyway'. If I'm suppose to get married it will happen at some point. It could be next year, it could be when I'm 60. You never know.

It's life. Some people have this mind set of getting married at a certain age like it's a must and really it ruins relationships. Because when it moves to looking for a husband rather than making friends, you'll take anything from anybody. I don't think things should be that way.
You've heard of love at first sight before.

I don't believe in it. I think love grows. You discover love. I don't think I can meet anybody
today and say that I've fallen in love. You should take your time, nurture it and let it grow.

Isn't your mum worried about your perception on marriage?

My mother loves me. She'll be alright. She understands that I'm a bit special and different. She started to know when I first came home with no hair and then I said I wanted to do 'dada' (dreadlocks).

I was engaged to be married sometime back in the states and when I talked to the person to let him know I didn't think it was the right time for me to be married because I wasn't ready, my mum didn't understand where it came from. She kept asking me what happened but I told her it just wasn't 'it' because there's no point getting committed to something you don't think will last forever. After a while she said, 'okay I'm here for you.

So what would make you decide to marry someone?

I have to be comfortable with whoever it is. I have to be able to tell the person any thing and vice versa. Trust is important. It's a huge task for me being an open book. I have to be happy.

I don't care what money you have but if I'm not happy around you, it's pointless being with you.

Would you consider separation or divorce as option?

I hope not. If I get into something, I hope it'll be forever because it's supposed to be. But seriously separation and divorce is always an option. Apologies to anyone out there who doesn't agree with me. But if a man touches me or lays his hand on me, I won't care what kind of drugs you're on or the evil spirit at work in you at that time, it just will not work. I'm totally honest here.

And what if you're still in love with him?

Olorun ma je'ari (God forbid). If you mentally or physically abuse me, or make me feel less than human, you're certainly not my husband.

I love children but I'm not sure I want any (laughter). Children love to be around me. Trust me, I'm great with kids but I don't want to be pregnant. Don't you see how pregnant people look? After the whole nine months, you have to push him out (labour) and before you know what there's part 2 and 3 (other babies). Even if I don't get married, I'll love to have kids. But then I'll definitely adopt.

Do you plan on going back to the states for any reason?

I would love to visit my family and friends. But then how much time would I have to see them all so maybe they should come and visit me instead.