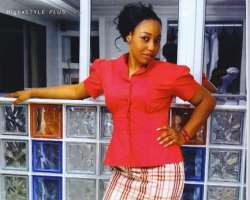 •Rita Dominic
Whao! This is cheering news to all fans and followers of Nollywood, the pride of Africa, as Nairobi, the capital of Kenya will come alive on February 25 and 26 for another star-studded gathering.

On the above dates, several leading Nollywood stars, stakeholders and their counterparts from other African countries that submitted entries for this year's edition of the Africa Movie Academy Awards (AMAA), will converge at the East African nation for the nominations night/bash.

The event, which is already serenading the entire Nairobi, holds on Friday night at the posh Laico Regency Hotel, amid applause and glitz. Nollywood heavyweights billed to grace the evening occasion with their intimidating presence, include: Joke Silva and Olu Jacobs, Rita Dominic, Mercy Johnson and Ini Edo. Others include, Mike Ezuruonye, Jackie Appiah, Lynda Forson, and Kate Henshaw Nuttal among many others.

In a statement released by the Director of Administration, AMAA, Mr. Tony Anih, the Nairobi event is being planned to connect with the East African bloc that comprised about eight countries, including Uganda, Tanzania, Rwanda, Burundi, Malawi and others.'East Africa has made very strong showing and presence in AMAA since we started particularly in the last three editions.

Apart from submitting films for the awards, filmmakers and allied practitioners from these countries have come to Nigeria to attend the awards. The AMAA secretariat felt it was time to make them have a feel of the award by taking the Nominations Night to them and thereby increasing the AMAA brand visibility in that region of Africa. Nairobi is central to East Africa and it is the economic hub of the region. It will be easy for people in East Africa to come to Nairobi. It will be a great Night'.

Another unique feature of this year's nomination night is a concert that will rock the following night at Carnivore Gardens, Nairobi and featuring P-Square, J Martins and other top artistes from Kenya and South Africa.

According to Mr. Anih, the concert will be an icing on the cake for the nominations, adding that the footprint of AMAA will be so visible in East Africa after the two-legged events that participation in the award from the region will double in subsequent years.