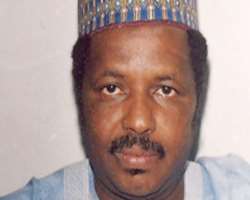 ABUJA, Feb 01, (THEWILL) - The Socio-Economic Rights and Accountability Project (SERAP) has urged President Goodluck Jonathan to “urgently rescind the recent decision by the Attorney General of the Federation and Minister of Justice, Mohammed Adoke (SAN) to withdraw the case file of Minister of State for Health, Suleiman Bello, who is accused by the Independent Corrupt Practices and Other Related Offences Commission (ICPC) of N11.2million fraud.”

In an open letter addressed to President Jonathan dated 1 February 2011 and signed by SERAP Executive Director Adetokunbo Mumuni, the organization said that, “We are concerned that this request by the Attorney General is not in the public interest, and may undermine the cause of justice in the case.”

The organization also said that, “We note that the official charged by the ICPC in this case is presumed to be innocent until proven guilty by the law court. We also recognize that Section 174 of the 1999 Constitution grants to the Attorney-General of the Federation the power to “(a) institute and undertake criminal proceedings against any person before any court, in respect of any offence created by or under any Act of the National Assembly; (b) to take over and continue any such criminal proceedings that may have been instituted by any other authority or person; and (c) to discontinue at any stage before judgement is delivered on any such criminal proceedings instituted or undertaken by him or any other authority or person.

“But the same section requires the Attorney General to exercise his power having regard to the public interest, the interest of justice and the need to prevent abuse of legal process. There is no greater public interest than the responsibility of the government to consistently tackle high level official corruption and the impunity of perpetrators and to be seen by the public to be doing this.

“This is exactly what the interest of justice demands. Also, there is no information that the Attorney General is alleging abuse of the legal process by the ICPC, and as such the exercise of the constitutional power would appear to be arbitrary and unnecessary in this particular case.”

According to the group, “It would seem that the request by the Attorney General for the original case file in this case is a deliberate attempt by the government to undermine the independence and integrity of the ICPC in the discharge of its statutory mandates.

“We are also concerned about the executive interference in the work of the ICPC, and believe that apart from undermining the credibility of the ICPC, shielding suspected corrupt high ranking public official from effective investigation or prosecution violate the provisions of the Constitution, the ICPC Act, and the UN Convention against Corruption, to which Nigeria is a state party.”

SERAP reiterated that “in particular, the UN Convention against Corruption imposes clear obligations on Nigeria to investigate allegations of corruption, prosecute suspected perpetrators and to ensure that national anti-corruption institutions such as the ICPC “are granted the necessary independence and human and material resources to enable them carry out their functions effectively and free of any undue influence.

“We also believe that selective prosecution of corruption cases can be counter-productive, and in fact will not help to transform a culture of corruption in Nigeria. It will make establishing transparency and accountability in governance a distant possibility. Similarly, a selective approach to anti-corruption fight cannot achieve credibility or legitimacy, nor enjoy public confidence and support necessary to address the culture and legacy of corruption in Nigeria.”

It noted that “consistent prosecution of public officials—whether high or low—suspected of corruption would help strengthen the rule of law in the long-run, and erode the entrenched culture of impunity of the country’s leaders.

“Because corruption is well entrenched in Nigeria, fighting it requires not only a minimum level of political will and an adequate and sensible strategy, but also involves being ready and able to confront powerful interest groups that clearly benefit from the status quo and will resist any such initiatives. Impunity arises and thrives when there is lack of accountability among high ranking government officials. We believe that the performance of the ICPC so far has been incredible in terms of achieving the prompting, guiding, and other roles mapped out for it under the ICPC Act; thus helping to curb corruption in Nigeria,” the organization added.

“We therefore urge you to use your position and good offices in this matter by instructing the Attorney General to respect the independence and freedom of action of the ICPC. This will be entirely consistent with your expressed commitment to fight high level official corruption and the impunity of perpetrators in the country,” SERAP stated.