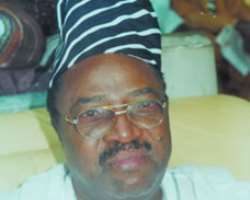 Godwin Daboh
The controversy over the rejection of President Goodluck Jonathan as the presidential candidate of the Peoples Democratic Party (PDP) by the Arewa Consultative Forum (ACF) deepened at the weekend as a chieftain of the party, Dr. Godwin Daboh Adzuana and a former Lagos State Police Commissioner, Mr. Abubakar Tsav, faulted the group's stance.

The duo, in separate interviews with Sunday Sun dismissed moves by the Arewa Consultative Forum (ACF) to stop Jonathan from winning the April presidential election.

According to them, the group's stance will not affect Northern electorate's disposition to vote for the president.

The ACF in a communiquÃ© after a meeting in Kaduna during the week, had rejected the outcome of the presidential primaries of the PDP which produced Jonathan as the party's candidate. The communiquÃ©, issued after the meeting which was chaired by General Ibrahim Haruna (retd) and signed by ACF's National Publicity Secretary, Anthony Sani, criticised the outcome of the primaries.

'The emergence of Dr. Goodluck Jonathan as PDP presidential candidate is legally and morally wrong because it is a violation of that party's constitution which clearly requires that under the zoning/rotation formula, a northerner be returned as candidate in the 2011 general election.

'In this regard and in the light of its principled stand on fairness and rule of law, the ACF rejects the outcome of PDP presidential primaries,' it said. The ACF also has harsh words for other political parties, adding that the process through which they conducted their primaries fell short of the expectations of Nigerians. The primaries, it added, were thoroughly compromised through lack of internal democracy within the parties, which led to manipulation, intimidation and other illegalities.

'These practices will greatly undermine our democracy and make it almost impossible for otherwise credible people to participate in the electoral process in future,' the said.

But Daboh described the reported rejection of Jonathan's candidacy by the ACF as of no consequence. He cautioned the forum against blackmailing the PDP, adding that party members have spoken at the national convention that they prefer the President as PDP presidential candidate.

Daboh likened the ACF to 'a powerless body made up of expired politicians who cannot determine who rules Nigeria because it does not have the mandate to speak for the North as it is trying to arrogate to itself.'

The PDP chieftain who expressed regrets over the decision of the forum said: 'ACF does not have more than 25,000 members and it is not in many states of the North. I am sure that there are no chapters in Benue, Niger and Kogi states and I wonder where they derived their power from. The ACF is only known at its secretariat in Kaduna. They can't influence anything or dictate the direction of the politics of the North.

'The people who can say whether Jonathan is recognized or not are the PDP members that gather at the special convention and they have made their choice. Nobody has the power to say anything again. The ACF should stop trying to blackmail the PDP because many of them are not even members of the party.

'Nigerians will go to the polls and decide whether they want Jonathan to be a President or not; but I am sure they will back Jonathan because he has so far given good governance and stability to Nigeria.' On his part, Tsav said the Northern political pressure group's rejection of Jonathan would not affect his election bid because the era of a monolithic North was gone.

His words: 'I would think the North can stop Jonathan because the North itself is divided. We don't have one North anymore but a group of states in the zone. There are some states that are in favour of Jonathan and there are some others who are against him.

So, it is impossible to say that the North can stop Jonathan.' On the chances of other Northern presidential candidates- Maj-Gen. Muhammadu Buhari of the Congress for Progressive Change (CPC) and Mallam Nuhu Ribadu of the Action Congress of Nigeria (ACN)- to defeat Jonathan in the election, Tsav said it would be difficult to predict because the country had been divided along ethno-religious line over the presidential election.

He, however, added that if this factor is taken into consideration, Jonathan has 50-50 chances of defeating Buhari and Ribadu. 'The fact is that people from the South-South are insisting that he has the right to contest while those other parts of the country are afraid that he could go for a second term if he wins. The North is afraid that should Jonathan win and he goes for a second term, it will take the geo-political zone a long time before a Northern will become president again,' he said.