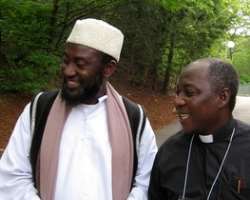 
Leaders of faith organizations (men and women) have risen to defend the masses at times of great political turmoil. I will start with the late Pope John Paul II. The late Pope John Paul II engaged himself in an undercover resistance against the German occupation of Poland . He and a former archbishop of Krakow (late Cardinal Sapieha) ran a secret organization that helped the Jews escape from the Nazis. Later when he became the Pope, he spoke against contraception, abortion, and scientific intervention in the process of human reproduction. He stood against homosexuality and same sex marriages while being a strong critic of divorce. He spoke against capitalism and Marxism and called for a new economic order. His actions helped to undermine communism in the former Soviet Republics . Late Pope John Paul II exercised so much influence around the globe and world leaders listened to him. He always campaigned for the release of political prisoners. He did in Cuba and Fidel Castro released many. He influenced policies around the world and met almost all the world leaders while he was alive. The current Pope Benedict XVI called for a two state solution the moment he arrived Israel on 11th May 2009 .


In 1953 when Fidel Castro failed in his first attempt to start his revolution, he was declared wanted dead or alive by the General Batista regime. Infact he was to be shot, except that Catholic Archbishop Perez Serantes prevailed on the authorities to save his live and that of his remaining colleagues (fidelistas) who were still alive. Again in 1956 when Fidel Castro was making his second attempt to start his revolution, his rebel army was almost completely annihilated. It was a Seventh Day Adventist preacher named Argelio Rosabal that gathered his fellow Adventists and told them that Fidel and his group must be saved. He provided support with which Fidel Castro and his group survived.


Dalai Lama: The spiritual head and leader of the Tibet has been deeply involved in the political struggle for the liberation of Tibet from Chinese occupation. The present Dalai Lama has taken the case of Tibet to all over the world. He has literally put Tibet on world spot light, campaigning for independence of Tibet . Presently he is involved with Prince Charles (Princes of Wales) on a recent film/video release to highlight the plight of the rainforests


In May 2006, the Archbishop of Canterbury (Dr Rowan Williams), Catholic Archbishop of Westminster (Cardinal Cormac Murphy-O'Connor) and the Chief Rabbi of the United Hebrew Congregations of the Commonwealth, Dr Jonathan Sacks protested against the proposed legislation to allow assisted dying for the terminally ill people in the United Kingdom. At another point the Archbishop of Canterbury caused uproar by calling for the introduction of some elements of sharia law in the UK . The Anglican Bishop of York in the UK (Dr John Sentamu) publicly called for the overthrow of President Robert Mugabe of Zimbabwe . He made the call on 8th December 2008 . Both Archbishop of Canterbury (Dr Rowan Williams) and Anglican Bishop of York (Dr John Sentamu) asked the British public not to vote for the British National Party (BNP) on the 4th June 2009 election.


Still in the United Kingdom , the Christian Party and Christian Peoples Alliance were campaigning seriously for votes for the European Parliamentary elections. Their campaign message was that political parties need not run only a political campaign, but a spiritual and moral one. The leader of the Christian party in the UK is Revd George Hargreaves.


Archbishop Desmond Tutu played active roles during the South African struggle against apartheid. When Mandela was in prison he spoke against the oppressive regimes. He won a Nobel peace prize in 1984 for all his efforts. When Mandela was president of South Africa , he was chosen to chair the South African Truth and Reconciliation Commission to investigate crimes committed by both sides during the apartheid era. He was also called to chair a similar truth and reconciliation commission in North Ireland . Bishop Tutu advocated the use of force to remove President Mugabe of Zimbabwe .


Reverend Father Aristide Jean-Bertrand spoke out against human rights abuses in Haiti . He survived several assassination attempts and entered politics as the leader of National Front for Change and Democracy. On 16th December 1990 he won a presidential election and was sworn in as President on 7th February 1991 .


Rev Martin Luther King was a Baptist priest who became a major figure in the US Civil Rights Movement. His speech (I have a dream) was credited with prompting the 1964 Civil Rights Act in America . He won a Nobel Peace Prize on 14th October 1964 .


The late Mother Teresa was a Roman Catholic nun. She worked all her life to save the poor and dying of Calcutta in India . She won a Nobel peace prize in 1979. By the time she died, her organization and affiliated groups had more than 200 different operations in over 25 counties around the world. She influenced policies to favour the poor people of India .


In Nigeria the Christian Association of Nigeria urged Christians to go out and vote en masse during the 1993 presidential elections. Nigerian leaders of faith organizations have tried in the past. Its worth commending that the following clerics have made a mark in Nigerian politics, Olubunmi Cardinal Okogie, Most Revd Peter Jasper Akinola, Archbishop John Onaiyekan, Bishop Gbonigi, Rev. Adebiyi of NADECO, the Catholic Secretariat of Nigeria, Mathew Hassan Kukah, Fr George Ehusani, Rev Chris Okotie (ex presidential candidate) etc. Thisday newspapers (online version) of Sunday 7th June 2009, reported that Pastor Kumuyi (Founder of Deeper Life Christian Ministry) urged the federal government to adopt a new approach in solving the Niger Delta Crisis. This article is an appeal, a call, an invitation and a save our soul (S.O.S.) Message for more leaders of faith to get more involved with the politics of Nigeria . They are in an advantaged position to mobilize Nigerians for political changes.


The situation requires their active intervention as it has been done by their colleagues in some parts of the world. They need to speak out loud and possibly shout since our leaders appear to be deaf. The deplorable political situation matters a lot to Nigerians. Not speaking out is dangerous. Quoting Martin Luther King “Our lives begin to end the day we become silent about things that matter”.


During my last visit to Nigeria (January 2009), I realized that most people have lost hope in our political system. Most of the people I spoke with have handed over every thing to God. Being a Christian, I believe that God will do to Nigerians what he did to the Israelites when they were under Egyptian rule. God will certainly raise a Moses amongst us. But if our political system is dirty, let every one join in the cleaning process. We need righteous leaders, because “righteousness exalts a nation” (Proverbs 14:34 )


Religious organizations are closer to the people more than the government. They are more in touch with people who have been inflicted with pains and misery of bad governance. They will provide tremendous support base if they join the struggle for the Nigerian political reform process. Politics and governance are too serious a business to be left in the hands of politicians, let alone the Nigerian politicians. Am sure many Nigerians will share my views. A vacuum exists in the Nigerian political arena to be filled by the leaders of faith organization. Alternatively they should join voices and actions with other groups to agitate for political reforms or let them raise righteous leaders for our country.


There is nothing wrong if our faith organizations should provide spiritual and political support to Nigerians. The costs of bad policies or bad leadership will be borne by all including the faith leaders. Therefore your efforts are highly needed in the match to reform the Nigerian political process. May God bless Nigeria .