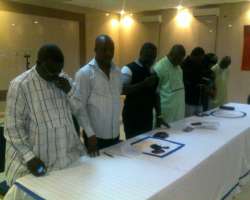 The Peoples Democratic Party (PDP) candidate for Andoni/Opobo-Nkoro Federal Constituency in the forthcoming general elections, Warisenibo (Hon) Dakuku Adol Peterside has hosted members of his campaign team, The Real Choice for Change Campaign Organisation and the 44-man contact and mobilisation committees across the 22 wards in Andoni and Opobo/Nkoro LGAs that make up the constituency, to a dinner.

The dinner which took place last Friday also had in attendance the Deputy Chairman of the PDP in Rivers State, Hon. Dagogo Eli Legg-Jack and other friends and well-wishers of the Dakuku Peterside who, until recently, was the Rivers State Commissioner for Works.

Speaking at the dinner, Peterside thanked members of the campaign team and all those who in one way or the other contributed to the successful outcome of the primaries which culminated in his emergence as the candidate of the PDP for the Andoni/Opobo-Nkoro Federal Constituency in the 2011 elections.

“I invited you here to thank you for your individual and collective roles in the victory we secured, not just for me, but for all of us at the PDP House of Representative primaries recently,” he declared.

Peterside further stated: “Thank you because you have set a precedence for change in our constituency.”

He reminded the august gathering that he would always remember the efforts and sacrifices made individually and collectively to enable him emerge as a candidate promising that he will continue to cherish and show appreciation to those behind his success.

“Those who know me know that I value my friends sometimes, more than my relations because I did not have the choice in selecting my brothers and sisters as against my friends whom I'm at liberty to choose or otherwise; so I value my friends a great deal. So, I make this promise to you that I will not forget your sacrifices and contributions to my eventual election to represent the Andoni/Opobo-Nkoro Federal Constituency at the House of Representatives come April 2011; you must regard my victory as your victory,” Peterside declared.

The candidate re-iterated his belief in breaking down artificial and primordial walls of suspicion that had held back the social and economic integration of the people and communities of Andoni, Opobo and Nkoro.

On the significance of his victory as the candidate of the PDP for the area, Peterside said that as much as he craved for success at the primaries and the elections that will follow, such victories could only make meaning when it is won without violence.

Peterside enjoined all to work for the overall success of the PDP and all the party's candidates in the forthcoming general elections.

Earlier, the Coordinator-General of the The Real Choice for Change Campaign Organisation, Hon. Sampson Egop thanked everyone especially members of the organisation and the contact and mobilisation committees for contributing to the successful emergence of the candidate at the primaries.

“By the special grace of God, we've conquered; what is left now is for the party to work with us to complete the journey; we have unloaded our responsibilities successfully by ensuring that Hon. Dakuku Peterside emerged as the candidate of the PDP for our Federal Constituency in the 2011 elections.”

Hon Egop stated that the campaign team would now re-strategize to ensure ultimate victory in the general elections.

Also speaking, one of the mobilisation/contact committee members, Hon. Paul Ben-Cookey opined that campaign for the candidate must be sustained through posters, handbills, radio and television jingles, door-to-door campaign by volunteers amongst others.

In his speech, a member of the Publicity Sub-Committee, Mr. Athanasius James thanked Hon. Peterside for being appreciative of the sacrifice by all and sundry in the campaign team for his emergence.

“This is the first time that a candidate or elected official in a similar position in the Federal Constituency is returning to thank the people who worked for their success; the event tonight signifies better days ahead because we believe that when elected as a member of the House of Representatives, you will continue to be part of the people; we believe that you will always appreciate our people during your tenure,” James said.

Speaking in a similar vein, Mrs Grace Sam Jaja, South-South Zonal Ex-Officio member, thanked the candidate for being the vehicle for which the government of Rt. Hon. Chibuike Rotimi Amaechi has used to bring development to Andoni, Opobo and Nkoro communities.

“Look at the Unity Road for example, the administration of Rt. Hon. Chibuike Rotimi Amaechi through the hardwork of Hon. Dakuku Peterside will soon bring smiles to the faces of the people of the area. What about the massive sand filling going on at Opobo Town and several other ongoing projects?” Mrs. Jaja asked rhetorically.

Those present at the dinner treated themselves to a variety of beverages, Nigerian and continental cuisines before calling it a day. Dakuku Peterside delivering his speech at the dinner