Femi Lasode speaks on SANGO The legendary Afrikan King at 10 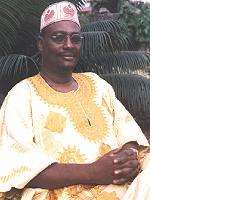 It is already ten years ago since Femi Lasode with his production company, Afrika 'n Vogue, Even-Ezra Studios produced its award winning film Sango featuring Wale Adebayo.
To mark the anniversary, Lasode is pleased to announce that commemorative very special anniversary DVD comprising the feature movie, the making and the video soundtrack will be released.

Lasode who spoke to Home Video People through an e-mail says the film “has garnered several honors since it was released. In 2006, Sango - the Legendary Afrikan King” featured at the Lagos International Film Festival.

The French version of the film was also shown at the Musee du quai de Branly in Paris in January 2006. It won the award for Best Feature Film at the 1st Abuja International Film Festival, held in Abuja, Nigeria, in October, 2004.

The movie also won the Best First Film of a Director at the Nigerian Film Festival held in Lagos, November, 2003. Before then, the African epic movie, was selected to open the Minneapolis/St. Paul International Film Festival, USA on April 14 - 29, 2002.

The French version of the film was launched at the French Cultural Centre, Lagos in 2001 and subsequently shown in Cotonou, Republic of Benin, and in Lome, Togo the same year.

At PANAFEST '99 in Ghana, the movie was also shown on Friday Night the 30th of July 1999 at Cape Coast the main PANAFEST '99 venue.

The next day the movie which became known as the people's movie was shown simultaneously at Accra, Takoradi, Kumasi and Koforidua. “Sango - the Legendary Afrikan King” is not new to Ghanaians.

It was screened in 1998 at National Theatre, Accra, Ghana as part of Septemberfest '98 film festival. It was also screened at Legon University also in Ghana. The epic film “Sango - the Legendary Afrikan King” continued to gain in popularity both abroad, and also at home.

In 1999, the acclaimed epic film was screened during the 7th Pan African Film Festival in Los Angeles, U.S.A, on 5th of February, and again on the 9th of February (due to popular demand). It was shown at private screenings in New York, New Jersey, Atlanta, Chicago, Minneapolis, and Seattle, all in the U.S.A.

Additionally, in 1998, “Sango - the Legendary Afrikan King” was screened by the Film Society of Lincoln Centre, New York, U.S.A. as part of the Fourth New York - African Film Festival. It was also screened at the Brooklyn Museum of Arts, and the Chicago Museum of Arts.

“Sango - the Legendary Afrikan King” has been screened by Afro Hollywood to select audiences in London, England, while Liverpool audiences also got a chance to enjoy the movie. Back home, “Sango had a successful outing in different University Campuses, Colleges of Education as well as Cinema houses nationwide. Most recently, it was screened for the past Executive Governor of Lagos State, His Excellency Bola Ahmed Tinubu, at the historic Glover Memorial Hall, Lagos.

The theme for the occasion was “The need to document our history on film.” Before then, the movie opened to a large number of cinema-goers at both the National Theatre, Iganmu and the Glover Memorial Hall, Lagos for three weekends in July, 1999. In 1998, “Sango - the Legendary Afrikan King”, was also screened at the National Arts and Culture Centre in Abuja for four days in 1998 to commemorate Nigeria's Independence day.

Earlier, the epic film had broken box office records at the National Theatre, Iganmu, Lagos as the first English-speaking film to attract a massive turnout.

The film which started showing at Cinema hall I between 1st - 3rd April, 1998, attracted an estimated crowd of over 1,800 people each day. On the 4th and 5th days of April, it had to be relocated to the Exhibition hall whose seating capacity is far greater than Cinema Hall I that was earlier allocated to it.

On the 18th of September, that year, “Sango had a critical screening in Lagos at Goethe Institute (Germany Cultural Centre) during the Germany Film Viewer's forum. As you know, Lasode says
“Afrika 'n Vogue/Even-Ezra Studios. Afrika'n Vogue is a multi-dimensional marketing and media management outfit, with emphasis on audio and video production.