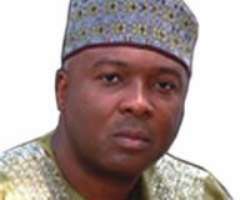 The development came as Alhaji Bamanga Tukur, a former governor of the defunct Gongola State and member of President Jonathan's Advisory Committee admonished Alhaji Atiku Abubakar to remain in the PDP and re-contest the party's presidential ticket in 2015. Governor Babangida  Aliyu of Niger State also urged Atiku not to quit PDP.

Atiku, a former vice president, lost his bid to clinch the PDP presidential ticket at the national convention of the party held in Abuja recently. The mandate was given to President Jonathan.

Meanwhile, more facts have emerged on what predisposed some delegates to voting in certain directions during the PDP national convention. The Guardian learnt that many delegates from Niger State voted for Atiku because they wanted power to shift to the north.

The 36 state governors also lauded the President Jonathan for advocating the implementation of what he termed 'Consolidation, Appeasement and Reconciliation (CAR) process.'

Speaking on behalf of his colleagues at a presidential summit on water held at the Banquet Hall of the Presidential Villa Abuja, Governor Aliyu said Nigerians have put the outcome of the PDP presidential primary polls behind them and have begun to ask what comes after the president's victory, adding that the governors are interested in the process of consolidation, appeasement and reconciliation. Niger was one of the five States that voted against the President Jonathan at the last PDP Presidential primaries.

Governor Aliyu who had initially wondered why he was chosen by the governors at the event to speak for them even with the presence of the Deputy Chairman of the Nigerian Governors' Forum (NGF), Governor Peter Obi of Anambra State, however said this is not the time for Nigeria to elect 'newcomers' as this would amount to starting all over again.

Congratulating the president for clinching the PDP Presidential ticket, the Niger State governor said: 'People are asking me about CAR and the opposition's attempt to unseat the largest party in Africa. But to bring anybody new is to start all over again.

'We need potable water. We have to give this administration the chance to do more. We cannot give a neophyte because we have gone too far.'

The governors, he said, are willing to support the federal government to achieve its goal of providing potable water for all as well as developing Nigeria to become one of the most developed countries by the year 2020.

While speaking to journalists yesterday in Yola, Bamanga Tukur said politicians should learnt to remain in their parties after loosing primaries, noting that democracy cannot grow if politicians continues to jump from one political party to another seeking a platform to contest elections.

Advising Atiku not to quit PDP, Tukur maintained that the party's presidential primary election results confirmed that all Nigerians irrespective of where anybody comes from can be the president of the country.

On the picking of Atiku as the northern consensus aspirant, Tukur said the arrangement was a personal opinion of Alhaji Adamu Ciroma, whom he said spoke for his family and not northerners.

'There is no person who is a democrat that can talk about consensus because it is the greatest enemy of democracy. It is against the rule of law and the constitution of the country,' he stated.

Commenting on the voters' registration exercise, Tukur lamented that it took him over 30 minutes to be registered as a result of the slow nature of the Direct Data Capturing (DDC) machines. And to ensure that all eligible voters are registered, Tukur urged the chairman of Independent National Electoral Commission (INEC) Prof. Attahiru Jega, to extend the time for the registration exercise.

On the voting pattern at the PDP convention, a top aide to Governor Aliyu who spoke to The Guardian in Minna on the condition of anonymity said his boss who is the leader of the party in the state and being the chairman of Northern Governors' Forum couldn't have asked the delegates to vote contrary to the will of the people of the north who strongly believed that power must shift to the region.

He pointed out that the majority vote for Atiku by Niger State reflected the stand of the north concerning zoning as enshrined in the PDP constitution.

Governor Aliyu was also said to have called on Atiku to put the PDP national convention behind him, take his defeat in good faith and join hands with others to ensure the success of the party in the general elections.

Aliyu who gave the advice at a separate event in Minna at the weekend described the outcome of the primary election as the true reflection of the wishes of the people, pointing out that as patriots, those who failed to make it at the primaries should wait for another time.

And like Tukur, Governor Aliyu cautioned Atiku against leaving PDP, saying whatever consultations he engages in should preclude the idea of leaving his party.

His words: 'May I specifically appeal to the members and supporters of our Party, the PDP to take the results of our National Convention and all the other conventions in good faith.  In line with the principles of internal democracy of our party, we shall continue to respect the views and wishes of the people in the exercise of their rights to elect candidates of their choice in all elections.'

'We should eschew all bitterness and work together for the success of our party during the general elections, so that we continue to deliver quality services to the people of this country and Niger State in particular. This is the time for consolidation, appeasement and reconciliation as one big family.'