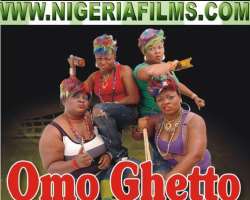 This piece is an acknowledgment of the creativity and brilliance in Funke Akindele's latest movie Omo Ghetto. I found the well-knitted work of art so compelling that I could not resist the urge to discuss the interesting plot of the movie which was woven around the fate of a set of identical twins, Ayomide and Shalewa (Lefty) who were separated by poverty of their parents (Baba Onibaba and Ayinke, a.k.a Mama Onimama).

Of interest is the clever twist introduced to the plot with the sudden replacement of quick-tempered Ayomide with her ghetto-based twin sister, Lefty, who we did not know about except for the fact that Funke Akindele played the two roles.

Even with the fact that Funke acted the two roles, viewers were thrilled with her performance. Shalewa (Lefty) was Ayomide who ran away from home , because she smashed a flower vase on her fiancé, Yanju, who consequently went into coma.

Cleverly, Funke in the movie, perused the biblical verse, Proverb 28:1 which says “The wicked flee when no man pursueth; but the righteous are bold as a lion”, to introduce Lefty (Shalewa) whom viewers thought was fleeing Ayomide. Honestly, most viewers including myself were waiting to call for Funke Akindele's head because of the sudden transformation of Ayomide to Shalewa in just two months but her excellent scriptwriting skills and imagination did the magic.

Characterisation is a major winning element of the movie. Bimbo Thomas who played Nikky in the movie , deftly mimicked the mannerisms of a typical tout in our society. Her's and Funke Akindele's best-in-class role as Lefty (Shalewa) at the Police station and their interaction with Ayomide's mother quite made title of the movie apt.

Veterans like Adebayo Salami (Baba Onibaba) and Peju Omobolanle (Ayomide's mother) added a beautiful twist to the title Omo Ghetto. Baba Onibaba's perfect interpretation of his role depicted a lifestyle in the setting of the movie and showed the mentality of a man of his socio-economic standing. Partially educated Baba Onibaba admitted that his life could have been better if he had heeded parental advice and completed his education. At the end, he expressed utter regret at the quality of his life, which I see as a subtle message to street urchins and miscreants that their lifestyle is not enviable. Given Adebayo Salami's reputation, nothing less is expected.He brilliantly played his role.

Still on casting, Busty's (Eniola Badmus') mannerisms and diction added flavour to the movie. Her delivery during the shit-bath scene depicting posh and ghetto girls was a commentary on the existing rivalry between the haves and have-nots in our society. The scene laid credence to the adage “All that glitters is not gold” by showing the difference in the appearance of posh-girls and their moral standard.

In spite of the brilliance of the script, casting, and production of this film, I believe that introducing Soji Taiwo (Omobanke) as the character that engaged the moving train of the Ghetto Girls after their victory at the “Messing Game” (Ofe Lohun) could have pushed the film beyond excellence.
Notwithstanding, Funke Akindele brilliantly explored the concept of fate to cleverly fuse two extreme worlds represented by Ayomide and Shalewa. Funke said “we are products of the society.

No human being is born sophisticated or primitive. We are what fate and environment make us. Also , the theme of love was elaborately projected and it showed that no human being is stronger than his/her natural strength. Omo Ghetto is didactic, entertaining, and revealing.
On the strength of this movie and the others by her in the past, Funke Akindele is fast establishing herself as a talented artist whose activities will entrust with the status of a role model in the Nigerian society sooner than expected.