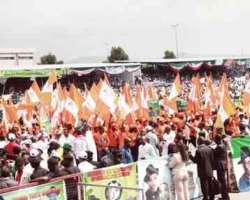 SaharaReporters will be providing as much reports as possible about the People's Democratic Party presidential primaries holding at the Eagle Square in Abuja today. The Nigerian ruling party will select between incumbent president, Goodluck Jonathan and former VP, Abubakar Atiku.

Party delegates from all over Nigeria arrived last night in Abuja to partake in the primaries. Overall, 5000 delegates are expected to participate in today's primaries.

Professor Tunde Adeniran is the party's electoral officer for today. SaharaReporters contacted him twice last night to clarify allegations that Chief Anthony Anenih (Mr. Fix It) had forced party delegates to be accredited in Governor Lodges of the various states as opposed to a general accreditation process. But twice, the professor turned politician told our reporter that he was busy in meetings with the committee saddled with conducting a "free and fair " election today.

“So we are smiling to the eagle sq to vote the highest bidder Goodluck.

It's over and may God Save Nigeria from this corruption. We have sold our VOTES.”

Citizen reporters said there was traffic jam last night at the Aso Drive in Asokoro area of Abuja as bribe money was being moved around from both sides.

-There is delay in the start of the Convention, the event which had been billed for 10:00 AM is yet to begin at 1: 00 PM Nigerian time

A PDP source told SaharaReporters that there are logistic issues causing delays. The source also confirmed that "Accreditation" of delegates is still going on and that it was "decentralized" confirming initial reports that state governors are coercing delegates to vote for Goodluck Jonathan.

A delegate said the PDP electoral process now requires that ballot boxes be provided for each state so that delegates who do not vote a certain way could be easily identified.

The EFCC was reportedly activated last night to bring to the notice of some state governors fresh allegations of corruption. The EFCC denies the allegation, but they reportedly found N5 billion in the account of a young son of Jigawa state Governor, Sule Lamido. The boy recently completed his National Youth Service Corp

Senator Teslim Folarin, the lawmaker charged last week for the murder Lateef Salako aka Eleweomo was flown to Abuja this morning to participate in the PDP primaries.

An Ibadan court released the senator this morning after police dramatically withdrew murder charges against him.

US dollars gain N50 against the Nigerian Naira.$1= N200, as delegates are no longer accepting bribes in naira.

-The PDP National Convention was supposed to have start some six hours ago. So far, nothing is going on as planned. Already there are serious concerns in Abuja over the integrity of the process.

Few minutes ago, the former Vice-President, Abubakar Atiku made it to the venue of the Convention. He is the first candidate to arrive.

Delegates from some states have not arrived. Meanwhile, the delegate list is still not ready.

Sources at the secretariat of the PDP just confirmed to Saharareporters that Chief Anthony Anenih bought 1000 delegate cards. Mr. Fix It is believed to be planning to substitute these cards for those delegates who could not make it to the Convention.

Delegates still at some Governors' lodges, for decentralized registration, risk being locked out of the Convention.

There are over 17,000 police men and women deployed at the venue.

Okwelsilieze Nwodo Takes Over again: Drama as deposed PDP chairman arrives the venue of the event as his deputy was reading his speech half-way. the PDP Deputy Chair, Dr. Bello Haliru Mohammed had to vacate the podium for the PDP chairman. You will recall that a state court in Enugu removed Mr. Nwodo from office yesterday via an injunction. It is not known of that injunction has been vacated. Saharareporters just learnt that the injunction was vacated today, we have no independent confirmation of this yet!

6:07 PM: Reports shows that the State Security Services is closely guarding delegates who already signed off to vote for Jonathan, no one is allowed to leave their area and no one is allowed to come in. PDP operatives told SaharaReporters that voting will not take place during the daytime, the strategy is to stretch out the Atiku camp, exhaust his delegates psychologically so that Jonathan can win by a wide margin tonight.

A ballot boxes are labelled on a state-by-state basis. And voting is expected to be done and results announced after each state conclude their voting.

7: 33 PM: Candidate Sarah Jubril and Abubakar Atiku have spoken. Atiku was very harsh on GEJ. His handlers have decided to rewrite his speech to respond to some of Atiku's points.

Dare Art Alade, a hip-hop artist is called in to "kill time".

Meanwhile, Mr. Nwodo cedes power to his deputy to continue as the acting chair of the Convention. Dr. Bello reads letter to the audience. We are still unable to confirm if the Enugu State court reversed it's injunction. Aides to Mr. Nwodo are not returning our calls.

Finally, Jonathan gave his speech and says he doesn't want to join issues with Atiku.

Voting commences, five states are called to vote in alphabetical order and the confusions starts

Prof. Tunde Adeniran PDP (and the Nigerian ambassador prevented from entering the US on the account of polygamy) announces that no party agent(s) can come near the ballot boxes until time for counting. But party agents think this a strategy that prevents them from telling who is authentic or fake delegates