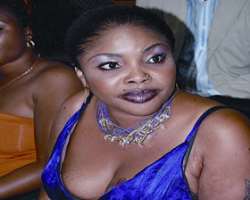 Sultary actress, Lola Alao who celebrated her 40th birthday last year is at the centre of controversy again! Those in the know revealed to Buzz that, this robust mother of one who had made headlines with controversial stories has once said she was born in 1968: However, from 1968 to 2010 gives you 42 years, so how come she's claiming to be celebrating 40 years instead of 42nd birthday. Over to you, Lola, your fans need explanation!