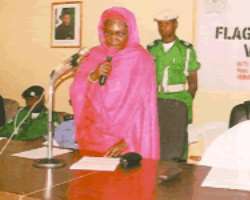 •Bauchi State NOA Director, Jummai Bello speaking while the state REC and others look on.

Hajia Bello said the forum was aimed at enlightening, sensitising and mobilising all eligible voters towards the success of the forthcoming voter registration exercise from January 8, 2011 to January 22, 2011.

She said that the voter education campaign flag-off would focus primarily on the electoral rights and responsibility of all eligible Nigerians who attained the voting age.

To avoid the problems of past elections, Hajia Bello, said that voter education could serve as a useful tool of enlightenment to mobiliseand sensitise the electorate with the required knowledge and education.

'The INEC, NOA and other stakeholders including the media, judiciary, NGOs among others have an important role to play in the Nigerian electoral process and their cooperation and involvement is essential component for successful and acceptable elections,' she said.

The NOA director who opined that the country was at a very crucial period in its democratic process, said it was time the citizens came together to ask themselves how they could work together to achieve a viable democratic culture.

Hajia Bello assured of the commitment of NOA to reach out to all the stakeholders as well as conducting public enlightenment, mobilisation and orientation on all government's programmes, policies and activities.

'Our Chief Orientation and Mobilisation Officer (COMOs) in all the 20 local government areas of the state were adequately equipped with the content and strategies for grassroots sensitisation, enlightenment, and mobilisation,' she disclosed.

The director said that all the COMOs would go into the wards and villages to explain to the people the message, to ensure that the people at the grassroots level understood very clearly, the procedures and guidelines of the forthcoming elections.

On the voters' registration exercise, she disclosed that the INEC, NOA and other stakeholders were working hard to ensure its success adding that, 'The success of this exercise is a pre-requisite for free and fair general elections.'

Hajia Bello believed that t traditional institutions have a crucial role to play in the success of the elections and admonished them to be committed to the creation of awareness and sensitization of the people to participate in the electoral process in the state and the entire country.

She contends that, '…Traditional rulers..should ensure that their subjects particularly the youths are not used to cause violence to disrupt the exercise.'

The Resident Electoral Commissioner, Bauchi State, Senator Illiya Audu in his remarks expressed concern that Nigerians were complacent on the concept of 'one man, one vote' mainly because the majority do not know the reason why they need to vote.

'Their votes are influenced by a relative politician or money bag politics, but not for development. That is why the issue of good governance elude us as a nation for a long time,' he lamented.

The    INEC boss was optimistic that Nigeria can conduct free and fair elections if they challenged themselves to depart from the old ways of doing things adding that if smaller countries like Ghana could do it, Nigeria can do it.

He said that one of the ways to make it right was to get the voters' registration exercise right, devoid of multiple registration and underage registration, and at certain times by proxy.

Senator Audu said that stakeholders have a huge task of disabusing the minds of sceptics who believe that nothing works in Nigeria adding that the platform for voters must be provided this time around to restore confidence.

The Resident Electoral Commissioner commended NOA for the flag-off saying that it had kick-started the journey to nationhood, adding that, 'We must not fail, we must tell the world that we too can do it no matter the temptation. We are a nation of good people. We must tell each other the truth and nothing but the truth.'

He argued that political parties must come to terms with themselves and accept to conduct free and fair primaries to institute internal democracy from within the parties.

He urged politicians to desist from using money to influence registration and election and in the course of doing so, destroy the youths,. warning that, ' If politicians don't correct this attitude, we will end up destroying the future of our nation.'

In his contribution, Mohammed Maikafi, a chieftain of the All Nigerians Peoples Party (ANPP) said that it would be wrong to heap all the blames for the bane of conducting successful elections on political parties and politicians alone.

Maikafi said the majority of the blame must go to the umpire, INEC which had always in the past  favoured  used adhoc staff  to conduct elections that ended up being heavily flawed  advising that the forthcoming elections should provide an avenue for INEC to correct its mistakes.

The politician suggested as a way out, the electoral body must work in consultation with the National Youth Service Corps (NYSC), federal tertiary institutions to get the necessary staff.

The Peoples Democratic Party (PDP) state publicity secretary, Alhaji Alamin in his contribution assured that the ruling party was determined to ensure that the elections were free and fair and commended the NOA for the initiative.

On his part, the chairman of the State Council of the Nigerian Union of Journalists, (NUJ), Alhaji Dahiru Garba, assured the NOA that the media would always gives its support to the agency in order to carry out their activities that would sustain a credible elections next year.

Various stakeholders including the women groups, also called on Nigerians in general to work together towards a free and fair election that would be acceptable to all and sundry.

The representative of the police commissioner in the state, Chief Superintendant of Police (CSP) Onouha believed that illiteracy was the biggest bane to having successful elections in the country.

'The mass media have a big role to play here because obviously, there is failure of leadership at all  levels. The security agencies are ready to work for the success of the forthcoming election, but we needto revisit the electoral laws of the country especially as regards the duty of policemen drafted to ensure security during elections,' he said.