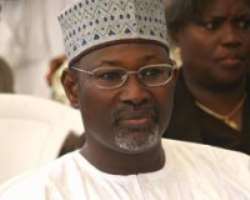 “AND you know the true sign of madness is if you do the same thing over and over again and expect a different result.  We've tried what they're doing and it didn't work.  And we wouldn't get a different result if we went back to it.  So we've got to move forward, not back.” ~ Barack Obama

Electoral fraud, as we have witnessed in Nigeria since the beginning of this fourth republic, is made possible by factors that are reducible to the following:

* The absence of a voters' register that is credible;

* The lack of adequate security for officials of the INEC, voting materials, representatives of the contesting candidates, and voters; and

* Lack of consistent transparency in the compilation of election results at the polling booths, verification of such results by representatives of the contesting candidates, transfer of the results to the collation centers, and ultimate release of the results by the INEC.

With respect to the rerun in Delta State, while voting went smoothly in some polling booths, the overall conduct of the rerun, as is inarguably the consensus of all non-partizan reports so far made of the election, was marred by the maladies listed above.

The INEC brought everything it had to Delta State: security, the press, plenty of INEC officials (including Comrade Jega), and plenty of voting materials. All attention was put on Delta State. Yet the people's clearly expressed will was successfully subverted in a most unconscionable manner, not at all different from our previous experiences. Matter of fact, the rigging has become well entrenched and more desperate. I do not have any reason not to believe that the April elections would be much worse, DDC machines notwithstanding. And by the way, four of the DDC machines stolen earlier are still at large.

As has been shown by the rerun in Delta State, the INEC is not even nearly half ready for the April elections. Free and fair elections do not just happen because we wish them to happen. They happen when adequate preparations are in place to grapple with the ills that make electoral fraud possible. The reponse of the INEC to these ills, as was demonstrated in the rerun in Delta State, is grossly inadequate to put the rigging of elections in check. Such manner of response will be woefully terrible in the April elections considering that the INEC will be dealing with our 36 states simultaneously.

Unless Jega is Jesus and has some unearthly powers to manufacture security and the sort of transparency requisite for the conduct of a free and fair election, we are guaranteed to have another episode of the 2007 elections this April. We have to devise a different method of policing elections, one that rely more on technology as suggested by Donald Duke. Needless to say, the time, political will, and resources to make such a change are not there at the moment. They will not be there between now and the April elections. So the demonstrably bankrupt and doomed method of policing elections in Nigeria will be used once more and the results, sad to say, stand a very high chance of being the same as we have so far known them to be.