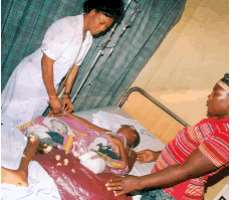 Chidera Onyegbula's story is pathetic and regrettable. It is a story that melts even a stony heart and brings tears to the eyes. Indeed, it is like a song not worth singing.

At nine years of age, she has walked through the valley of the shadow of death. Even though she survived, her life or what is left of it can never be the same again.

Today, she carries the ugly mark of her encounter with death. Worse still, her father could be on his way to jail if the plot of the woman who caused her misery is successful.

To be sure, Chidera was born without physical or mental disability. Beautiful, smart and active like most children of her age; she even nursed the childhood ambition of being a doctor or lawyer. But with the turn of events, the possibility of achieving her full potentials in life remains uncertain.

Today, the once bubbly girl is hopping around on one leg. Today, the joy of her parents has been cut short as they have been weeping in the valley of tears.

August 18 last year was the day that fate visited cruelty on the innocent girl. The day had begun like any other as she woke up hale and hearty. There was no premonition of any danger as she went about her early morning chores as her manner was.

The story, however, changed when her mother, Mrs. Chizobam Onyegbula, sent her on an errand across the street. The primary five pupil was knocked down by an Audi car said to be driven in a reckless manner by Mrs. Uche Ojukwu on Faulks Road by Nwaigwe street, Aba, Abia.

Thus began Chidera's journey into the world of pains and anguish. She was moved from one hospital to another and even had intensive native therapy sessions in an attempt to save her battered left leg. But rather than heal, the leg progressively deteriorated and began to decay and emit acrid odour. Finally, it was amputated above the knee on August 27. Now, she is writhing in pains and walking with crutches.

According to Chidera's mother, 'the driver of the car, Mrs. Uche Ojukwu, admitted at the New Life Hospital, Aba where my daughter was rushed to after the accident that she actually hit her. She explained that while trying to prevent the girl hitting her head on the tarred road as she was lifted onto the bonnet of the car, the tyre ran over her leg when she fell from the bonnet. She urged me to calm down, saying that the girl would be fine at the end of the day. She also urged me not to report the incident to the police, pledging to take care of everything concerning the girl. Maintaining that she would not run away, she gave me her house address and complimentary card.

'Then I told my husband what happened and he rushed to the hospital. When my husband came, he wanted to react but I prevailed on him to relax and pray that our daughter does not die. My husband wanted to go to the police station but I asked him not to do so because the woman had said she would prefer taking care of our daughter's treatment instead of giving the money to the police. We were later referred to the Living Word Hospital, Aba. It was there that the doctors said, after some days, that the girl's leg would be amputated because a certain vein was damaged during the accident.'

Then the story began to change. According to Mrs. Onyegbula, Ojukwu began to withdraw when she heard that Chidera's leg would be cut off. At that time, she had contributed N20, 000 to the cost of treatment.

Mrs. Onyegbula said: 'From the time we took our daughter from the Living Word Hospital to another hospital to seek a second opinion, we did not see the woman again. She removed her mobile phone sim card hence I could not reach her again. We moved from one hospital to another and she did not go with us. When they insisted that there was nothing else to be done except to cut off the leg, I ran to the woman 's residence using the address she gave to me.'

'When I saw her, she asked what I wanted. In tears, I told her it had been decided that the leg would be amputated and I did not have the N40, 000 they requested as deposit. My husband is a labourer and had no such money. She told me not to disturb her and ordered me out of her house. She said that what she has given was all she could. She asked if I did not have relatives to run to for help.

'To rub salt upon injury, she denied knocking down my daughter and added that after all the police did not arrest her for any offence. She claimed that my daughter was knocked down by a bus. So, I burst into tears because my daughter had begun to change colour. I came back home to narrate my encounter with the woman to my husband and we started looking for a way out to save our daughter's life.'

Then the tale began to twist. According to Mrs. Onyegbula, when Mrs. Ojukwu remained evasive, her husband, Mr. Cosmos Onyegbula, decided to report the matter to the police. She said that while her husband was making a statement at the CPS, Aba, one Inspector Nkwa Agwu overheard him and confronted him with a petition lodged by Mrs. Ojukwu through her lawyer. She claimed that the petition alleged threat to her life and attempt to kidnap her by Mr. Onyegbula.

Chidera's mother, a bead maker, said that on the strength of the petition, the hunter became the hunted, so to say. She said that but for the intervention of one Inspector Otaru Salawu, who was recording the case of road accident at the CPS, Aba, her husband would have been arrested and detained. The mother of five added that when Inspectors Agwu and Salawu visited Chidera in hospital to ascertain the true situation, both of them almost broke down in tears.

Further twist was added when, in September, the matter was sent to a magistrate court, Ikot Ekpene Road, Aba in a manner that the Onyegbulas consider less than tidy.

Against the backdrop of the manner the case was presented in court, a group known as Crisis Control Foundation has sent a petition to the Abia State Police commissioner, the Assistant Inspector General of Police (AIG) Zone 9, Umuahia and the Inspector General of Police (IGP) calling for the 'withdrawal of the case of road traffic accident against Mrs Ojukwu from the court for proper investigation as well as the transfer of the case of giving false information to the police'.

In the petition signed by HRM (Eze) Ugwueke Okeh, the sole administrator, Corps headquarters, the group stated: 'There was nothing like investigation in this case. This case is designed to fail. The case came up on December 7, 2010, neither the prosecutor nor the IPO showed interest. The accused lawyer put in a no-case submission due to the want of prosecution. The plan is already in motion. Yet this is the first real sitting. Mrs Ojukwu is on a charge which fails to reflect the fact of permanent injury. All these are known to the police, the accused and her lawyer but conceaded from the court in a grand criminal conspiracy.'

The petition noted that until the matter is transparently handled, Chidera's father would continue to bear the stigma of a kidnapper in an environment where kidnappers are hated with passion.

Speaking with Saturday Sun on telephone, Ojukwu said that it was principally a traffic issue. Maintaining that she spent over N30, 000 when Chidera was rushed to the hospital: She claimed to be sick at the time the girl was taken to Horseman Hospital when the amputation was carried out. She added that she borrowed to pay medical bills. According to her, things were rough for her family because her husband disappeared without trace three years ago leaving her to fend for their six children.

She said: 'The case is already in court. I was charged with a traffic offence but Chidera's father took it to State CID Umuahia where I was detained for two days. What they are doing is a contempt of court.'

On the issue of her petition at CPS Aba, she alleged that Chidrea's father publicly threatened her life, insisting that she must marry the victim. She added that she was receiving calls from unknown persons demanding ransom from her.

Ojukwu further volunteered that through initiative her Church raised some funds to offset Chidera's medical bills.