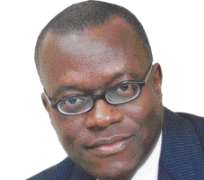 •Wale Onaolapo
Sometimes it pays to be aggressive in the pursuit of a vision. That is the testimony of Mr. Wale Onaolapo, Managing Director/CEO of Sovereign Trust Insurance (STI) Plc, as he states that some aggressive marketing strategies introduced by the management earlier in the year had indeed yielded positive returns for the underwriting firm, its shareholders and clients.

Onaolapo listed the new strategies to include, the establishment of a strong agency system to drive the firms retail insurance business as well as the alliance which the company entered into with one of the leading life insurers in the country with a view to marketing its products alongside that of the life insurer.

'These strategies caused significant improvement in all the firm's financial indices and positive result posted by the company in the first three quarters of this year,' said Onaolapo.

He also spoke on some of the challenges facing the Nigerian insurance industry, especially in the last one year.

New measures were introduced to reverse the negative impacts of the financial meltdown and capital market crash in the country and to mitigate the effect of the ongoing banking sector reform being championed by the Central Bank of Nigeria (CBN). As a result, insurance companies started experiencing difficulties with renewal of old accounts and getting new businesses.

Most importantly, in the third quarter of this year, some insurance companies who could not submit their 2009 financial reports to the Nigerian Stock Exchange (NSE) as expected of them were sanctioned. The delay according to some of them was because the National Insurance Commission (NAICOM) did not approve their reports in time to enable them meet the deadline set for submission of reports to the stock exchange.

NAICOM insisted that all insurance companies should comply with all its rules regarding provisions for outstanding premiums, solvency margin and most importantly, complying with the International Financial Reporting Standards (IFRS) which will make it easy to compare their financials with that of any other operator globally.

Challenges translated into opportunities
Deliberating on efforts by the company to turn these challenges into opportunities, the management of our company as part of its repositioning programmes opted to pursue an aggressive marketing strategy. This strategy did not just imply wooing customers, but it also meant the delivery of excellent services to customers nationwide; ensure customers are satisfied at all times. Our belief was that this strategy was the best option in retaining customer patronage for a long time.

We also took another bold step. Sovereign Trust Insurance entered into a market alliance with UBAMetropolitan Life Insurance Company Limited (UBAMet), an exclusively life risks insurer to enable it shore up its business volume. Under the new arrangement, STI marketed the various life insurance products on the stable of UBAMET to its customers while the latter also sold non-life products from the stable of the former to its own customers too.

The alliance was predicated on the anticipated generation of more revenues for both companies and to further deepen the penetration of insurance products to the every nook and cranny of the country.

The relationship is expected to be mutually exclusive to both parties under the agreement and it is expected that both organisations would provide an ongoing marketing support for the various products and services from the stable of each other.

In addition, we also established an insurance agency programme within the year aimed at expanding the scope of retail insurance activity in the company and increasing its market share.

I want to remark that the agency system of Sovereign Trust Insurance is geared towards building business leaders at the micro level of the Nigerian economy and that, they should see themselves as extremely fortunate getting such support from one of the industry's pacesetters.

Having resolved to develop to become a leading brand, providing insurance and financial services of global standards, our company has continued to demonstrate its readiness to rise up to the occasion at every point in time. Also we have ensured that our numerous customers and other stakeholders alike get good deals on their investment through the provision of innovative insurance and financial services that has been the hallmark of the company since inception.

Dividend reflected in Q3 results
STI has grown its underwriting capacity significant within the first three quarters of this year.

The company recorded a significant improvement in its income for the third quarter ended September 30, 2010 in spite of the harsh business environment that has persisted from the time the global financial crisis ravaged world economies. Premium income earned by the company rose by as much as 28.37 per cent, going up from the N2.54 billion recorded in the corresponding period of last year to N3.26 billion.

The company raked in gross premium income totaling N4.05 billion in the third quarter of this year, a 6.30 per cent improvement on the N3.81 billion that was reported in the corresponding period of 2009. Within the same period, the company's net premium income increased to N3.26 billion, a 14.79 per cent improvement over the N2.84 billion recorded in corresponding period of 2009.

It also raked in commission to the tune of N70.77 million a 35.35 per cent shortfall from the 109.77 million that was recorded in the third quarter of last year.

Sovereign Trust Insurance as at September 30, 2010 settled claims to the tune of N734.78 million.  This rose from the N440.56 million that was paid out to various insured by the third quarter of 2009, surpassing customers' expectations by as much as 66.38 per cent. Underwriting profit made by the non-life risk underwriter rose to N1.72 billion as at end of the third quarter of this year.  This was 30.30 per cent higher than the figure for the corresponding period of last year which was N1.32 billion.