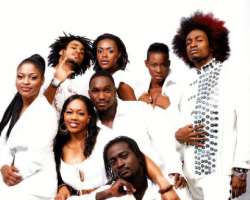 The Soundcity
Listen to article

It was another first for Nigeria's foremost lifestyle, music and
entertainment channel, Soundcity, on Sunday, June 1, as the channel's
new,
already talk-of-the-town Video Jockeys were finally presented to the
media, celebrities, captains of industry and the general public.

Denrele Edun, appearing as the most popular, or maybe just the most
enigmatic of the lot, thanked all guests for gracing the ceremony, and
even informed that greater magic is to be expected from the Soundcity
channel, especially with the new Ambassadors that just got on board.

Denrele, S Dot and Yeancah are already established figures on the fun
channel Soundcity, having come in with the very first generation of
Soundcity Ambassadors, and now, they have been joined in the exciting
television experience by five more none-the-less talented channel
ambassadors in order for the channel to keep fulfilling its reputation
of
adding value to life with the power of music.

It would be recalled that earlier in the year, Soundcity embarked on an
intensive and extensive search for additional VJs to help propagate its
vision of quality, music-powered entertainment and video jockeying.
Over
five thousand wannabes, craving careers in TV broadcasting, responded.
They were screened to 120, and later pruned to the ten that qualified
to
stay in the Soundcity VJ House at the Lekki Heights Hotel, where for
ten
days under live camera, they faced a rigorous induction that is the
hallmark of Soundcity Channel Ambassadors. Five of them were eventually
dropped to make way for those Revealed on Sunday.

According to Michele Dede, compere par excellence, and member of the
three-man Screening Committee that selected the new Ambassadors,
“selecting five people from five thousand surely wasn't a stroll in
the
Park; and by the reaction of everyone present here today, I believe we
have been vindicated”. Other members of the Committee were Kelvin
Luciano,
the debonair Chief Executive of QuestionMark Entertainment, and Mr.
Jacob
Akinyemi Johnson of Silverbird TV.

Miss Shileola Obisesan, Senior Brand Manager of the Consolidated Media
Associates, promised that a 13-day transmission on the Soundcity
channel,
of every single moment of the entire selection process is expected
soon;
right from the auditions to the screening and the final selection of
the
five newest TV sensations to join our beloved, fetching Rotimi Salu (S
DOT), magnificent Denerele Edun and charming Yeancah Dosunmu”.