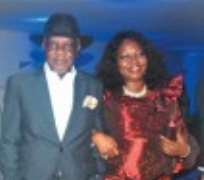 WITH the media hype that it generated, it wasn't a surprise that Koko Concert Lagos Series lived up to its expectation.

Held on December 24 at Eko Hotel and Suites, Victoria Island, Lagos, the event, a collaborative effort between Mo'Hits Records, The Beat 99.9 FM and Koko Mobile, registered strongly in the minds of hip-hop lovers and fans of the Koko master, D-Banj.

The show drew A-list celebrities from showbusiness and the outside world. It was a good opportunity for them to mingle and party while fire works rained on the streets.

Koko effect kept the audience in the filled-to-capacity hall alive as they remained glued to their seats listening, sometimes, dancing to various songs being played.

While Don Jazzy proved he is a choirmaster, as he directed the flow of the beats and the movement of the crew; D'Banj in his trademark pencil trousers and tiny beads hung around his neck showcased his skills, fusing hip-hop, afrobeat and traditional dances together to the admiration of the audience.