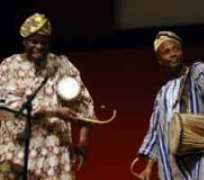 • Plans to preserve drum legacy of Timi Laoye
IT used to be 'Ede Day', during which rich cultural heritage of the land of Timi was celebrated; socio-economic and political advancements acknowledged; while collective dreams and aspirations of future engagements identified.

But the anniversary this year took a new dimension. The nomenclature, first, underwent modification motivated by historical and cultural nuances.

The 17th edition of Ede Day commemoration held recently in Ede, Osun State did not only have new headline: Ede Mapo Arogun Day, the content of the week-long celebration was also enriched in line with the mandate of the planning committee headed by Prof. Siyan Oyeweso.

The committee, Oyeweso said at the newly introduced Yoruba Talking Drum Festival held on December 8, 2010 as part of the highlights of the celebration, was charged to organize an uncommon celebration, 'that will be phenomenal in terms of attendance, scope, coverage, and depth and certainly put the ancient city of Ede into world's reckoning.'

Overwhelmed with joy, Prof. Oyeweso said, 'With the intent of promoting our common ancestral heritage and perhaps add colour to the spectrum of the 17th Ede Day Celebrations, we have put in place a programme of events that is enviable and worthy of our fatherland.'

He clarified the change in the name of the anniversary. 'This change in name is never sudden but thoughtfully informed by our commitment to extend the horizon of Ede Day's celebration from a community based project to a national project worthy of corporate sponsorship, and by extension, a heritage to be recognized by the appropriate agency of the United Nations.

'There is one Ede in the world, and there is no other Mapo Arogun known elsewhere; not the Iya Mapo in Igbeti, nor the Oke Mapo in Ibadan. Therefore, we see it as a duty to project that which is unique to us as people of Ede to the outside world in a manner which other important communities also reckon with the unique aspect of their culture.

'Hence, if Osun has Osun-Osogbo, and we could have Oke 'Badan Olomu Oru, Ikorodu Oga, Adamu Orisa (Eyo) in Lagos Island, just to mention a few, then there is nothing wrong in projecting the Mapo Arogun aspect of the noble people of Ede, a pointer to a clan with heroic beginning.'

The introduction of the talking drum festival, he explained, was mainly to preserve the exploits of the late Timi of Ede, Oba John Adetoyese Laoye…  reputed for making the talking drum popular within and outside the shores of Nigeria.

Through the king's efforts, Ede became a reference point in the art of drumming, specifically the talking drum. It is also on record that the late monarch with his group of skilled drummers and poets entertained the Queen of England when she first visited Nigeria in the late 1950s and thereafter in her palace in England.

Prof. Oyeweso told the audience at the NYSC Camp in Ede, the venue of the festival, 'As we celebrate this year's Ede Mapo Arogun Day, we equally own it a duty to bring into limelight the unquantifiable effort and contribution of the late Timi John Adetoyese Laoye in the preservation and promotion of Yoruba culture and tradition of the people of Ede.

'Specifically, he was responsible for showcasing on the global level the rich and important symbols and messages coming from various drums in Yorubaland. At a time, Timi Laoye's commitment saw him assembled all the known drums in the entire Yorubaland with a view to mastering the creativity and further understand the spiritual essence in each of these drums.'

He continued: 'If Timi Laoye tried to put his community on the world map through the drums, we own it a duty in the digital world of today to present the first ever Talking Drums Festival. Traditional drummers all over the length and breadth of Yoruba land starting from this year will be converging in Ede, during the Ede Mapo Arogun Day to exhibit the creativity, spirituality and ingenuity epitomized in the art of drumming among the Yoruba people.

'Just like the Argungun Fishing Festival, the Eyo Festival, Osun-Osogbo Festival, among others, the people of Ede will also be playing host to the world in celebration of an art once established and brought to reckoning by Timi Laoye.'

He went down the memory lane to underscore the enviable position of Ede town and its monarch in the Yoruba cosmology.

'In about the 18th century, the Alaafin of Oyo saw the need to protect the territorial integrity of Oyo Empire. This duty fell on his powerful military chiefs. In this military cadre, there were about 70 War Chiefs, with 16 of them in the upper cadre while 54 were in the lower cadre. The founder of Ede, Timi Agbale Olofa Ina, was one of the lords in the upper cadre leading the Oyo army.

'There has been no controversy that during this period, Timi Agbale rose to the head of the army in the Ibolo Province of Oyo Empire, and thus was saddled with the responsibility of warding off any form of external invasion, especially the Fulani Jihadists. Historical records, especially Samuel Johnson's History of the Yoruba from the Earliest Times to the Beginning of the British Protectorate, has it that Timi Agbale was a powerful warlord also noted for his deadly arrow. At the peak of his reign, it was almost a sacrilege to address Timi Agbale without the appellation, Olofa Ina.

'Since the history of the Yoruba's (and indeed the Oyo Empire's) socio-political system cannot be told without mentioning the name of this generalissimo, this year's edition of Ede Day has it in mind to relive the life and times of this hero. This will be done through a command performance commissioned by the committee, and put together by one of the leading theatre and motion pictures artists. Apart from serving to entertain us, the performance will afford us the rare opportunity to go down the memory lane and witness the epical birth of the place we now call our own,' Oyeweso concluded.