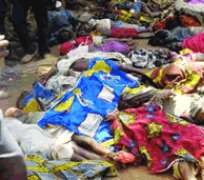 No fewer than 80 persons have been confirmed killed and 109 wounded in the bombing and reprisal attacks which took place in Jos from Christmas eve to date. Also, three people have so far been arrested in connection with the reprisal attacks. Security agencies have also discovered an area in Nasarawa Gwom where some persons were engaged in manufacturing of local bombs.

Meanwhile, the Plateau State Commissioner of Police, Abdurrahman Kano, said 20 houses were burnt in the reprisal attacks carried out on Sunday.

The National Emergency Management Agency (NEMA), which has so far identified four refugee camps in the state capital housing some of the displaced persons disclosed that it arrived at the figure of the victims after going round five hospitals where they were being treated. They include the Jos University Teaching Hospital, Our Lady of Apostles Hospital, ECWA, Sunna and Zakariya Hospitals.

The Deputy Director of Communications of NEMA, Mr. Daniel Balarabe Gambo, who disclosed that the records from the hospitals also showed that 71 victims had been treated and discharged. He said the agency was also working in conjunction with the police, Civil Defence Corps, Doctors Without Borders and Red Cross Society of Nigeria. He said most of the victims still on admission were in dire need of food and medication, adding that while NEMA was trying its best to meet their needs, it would equally need assistance from public spirited Nigerians.

Meanwhile, Spokesman of the Special Task Force on Jos Crisis STF, Capt. Charles Ekeocha, has disclosed to journalists that two of those arrested, Yusuf Sabiu and Ismaila Garga were arrested at Anglo Jos in the process of igniting dynamite to burn down some houses.

He said when they were searched, two wraps of Indian hemp and seven unexpended cartridges were found on them while the third man who was arrested on Monday morning was from Niger Republic. The STF spokesman said the men would be handed over to the police headquarters for further investigations.

The spokesman also disclosed , Monday evening that some of the STF men ran into some men making local bombs with dynamite powder and some spirits at Nasarawa Gwom. He said on sighting the men of the task force, the people took to their heels and could not be arrested but the task force was able recover the items they were using. He said efforts were being made to arrest the perpetrators.

Meanwhile, the Chief of Defense Staff, Air Chief Marshal Oluseyi Petirin  has visited all the areas rocked by last Friday's bomb blasts with a promise to get to the root of the incident, stressing that the crisis in Jos would no longer be treated with kid gloves.

Air Chief Marshal Petirin, while addressing the people at the spot of the incident at Kada-Biu area of Jos, assured that perpetrators of the dastardly act would be tracked down.

The defense chief said the intention of government was to fish out the perpetrators because 'we cannot continue to allow the people of evil mind to move about freely. I want all of you to be patient with the law enforcement agents and allow them to carry out a thorough investigation. I can assure you that positive result would come out of our investigation,' he assured.

In a related development, Plateau State Council of Nigeria Union of Journalists has announced the death of one of its members, Mr. Augustine Sindyi,  a photo journalist with The Nigeria Standard Newspapers in the recent  bomb explosions in Jos. According to a statement signed by the NUJ Chairman, Mr. Katdapba Gobum and the Secretary, Mr. Isaac Shobayo, Mr. Sindyi was at the scene of the multiple bomb blasts at Kabong in Jos North Local Government Area of the state when the unfortunate incident occurred. He was among the first casualties that died instantly before getting to the hospital.

Meanwhile, business activities have begun to build up while vehicles have started plying roads unlike what was experienced two days earlier. However, there is still strong security presence in the state capital.