GBAGBO, TINUBU AND THE NEW ELECTORAL EXPORT FROM NIGERIA 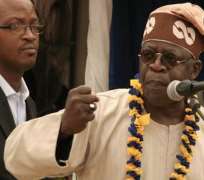 Laurent Gbagbo, the embattled president of the Cocoa-rich West African country, Cote d’Ivoire has never been linked with Nigeria ancestrally, but with the way and manner he got himself “re-elected” a few weeks ago, Gbagbo might be a Nigerian after all.

With the strategy of “cancellation of votes from ones opponent’s strongholds to gain electoral advantage,” which he must have learnt from the master of the game himself, former governor of Lagos State, Senator Bola Ahmed Tinubu, Gbagbo simply got the Constitutional Council to annul results in seven provinces in Northern part of the country, his opponent, Alassane Quatarra stronghold. And pronto, he had won the run-off elections by polling 51 percent of the vote.

Quatarra had earlier been declared winner by the electoral commission having polled 54 percent of the vote to Gbagbo’s 46 percent. However, officials in Gbagbo's camp alleged mass vote rigging in the North and also claimed that the earlier announcement was tantamount to a "coup" as it fell after a prescribed deadline. The Constitutional Council, which is headed by a staunch ally of Gbagbo, swiftly upheld that argument and said the incumbent had won with 51 per cent of the vote.

But should anyone blame Gbagbo for adopting a strategy that has worked here in Nigeria? Or isn’t it also democracy and rule of law at work? After all, Tinubu, the architect of the new electoral export from Nigeria even owed his emergence as the Alliance for Democracy (AD) governorship candidate for Lagos State to the “results cancellation strategy.” His godson in Ekiti State, Governor Kayode Fayemi also clinched the Action Congress (AC) governorship ticket after results the party’s primary election was nullified in over 50 out of the 177 wards in the State.

In the last two years, elections have been won and lost in Nigeria through the courts, especially the Appeal Court simply by nullifying votes from candidates’ strongholds and declaring winner based on results from areas where petitioners’ scored high votes. For instance, in all the States where elections won by the Peoples Democratic Party (PDP) candidates were nullified in favour of the Action Congress of Nigeria (ACN), votes from the PDP strongholds were simply nullified by the Court of Appeal and victory awarded to the ACN based on results from areas where the party had impressive showing.

In the particular case of Ekiti State Governorship rerun election, the court found nothing like rigging or any electoral malpractice against the PDP and its candidate, Chief Olusegun Oni. Rather, the fate of Oni and the PDP was the sins of the Independent National Electoral Commission (INEC) and Security agencies. In the Appeal Court judgment, there was no evidence of proven cases of ballot stuffing, ballot snatching, falsification of the result sheets on behalf of Segun Oni, or the PDP. Yet, votes of four wards of Ido-Osi Local Government were nullified simply because INEC could not produce voters register used for the accreditation of voters on election day, which had been burnt by hoodlums of the ACN!

The court held that ‘’…………….’the effect of the failure to produce the voters register for the wards in question for instance is that there cannot be any proof that the requirement of accreditation was complied with. Similarly even with the production of forms EC8A, EC8B for ipoti wards A&B. the withholding or absence of forms EC25, EC40C being used and unused ballot papers allegedly used in both wards would not give credence to the deficiency created in Ipoti wards rerun election. The same vice has also infected the rerun elections in four wards of Ido Osi local govt wherein the respondent tendered forms EC8A for the majority of the units constituting the four wards….. As rightly submitted by the learned senior counsel for the appellants in the absence of accreditation, the purported result for the polling units in forms EC8A and tendered are seriously plagued and vitiated.”

The tribunal thus rejected the findings of the lower tribunal which stated that; “it is our opinion that forms EC8A (the real votes cast at the polling booths’)tendered by the 1st and 2nd respondents are acceptable and form the basis of this election notwithstanding the absence of voters register which has been burnt by the petitioners agents and supporters”

Therefore, like the case of Gbagbo, who is holding on to power, after using the Constitutional Council to cancel votes from some of the areas where Quatarra had high votes just because result of the areas were not declared at the stipulated time, the issue of non-production of voters register, already destroyed by the ACN also led to the cancellation of the 15,000 votes of the people of Ido-Osi the home base of Chief Segun Oni thereby affording victory for Fayemi.

However, while the ingenuity of Gbagbo, which he ostensibly learnt from Tinubu and his men, is now attracting worldwide condemnation, it was hailed when it happened in Nigeria!

Or was it not the same strategy of nullifying votes from the opponent(s) strongholds to get undue advantage, with which thousands of Ekiti and Osun States voters were disenfranchised that, has now been used in Cote d’Ivoire by Gbagbo?

Perhaps, the international community that is now condemning what happened in Cote d’Ivoire was sleeping when it happened in Nigeria; especially the recent Appeal Court judgments in Ekiti and Osun States or it simply chose to play Ostrich because it only affected States and not the entire country.

But it might not be too late for the entire world to begin to focus attention on this new and dangerous trend of getting electoral victories through the courts. This has even become more imperative as Nigeria; the most populous black nation goes to poll next year.

If allowed to continue unchecked, a president could emerge in Nigeria by just getting the courts to nullify votes in 12 out of the 36 States in the country and winner declared based on results from 24 States! Then, whoever chooses to make noise – be it local or international community would be doing so for nothing because like it is now in Cote d’Ivoire, the ensuing conflagration would have gone beyond control! Olayinka, a journalist writes from Okemesi-Ekiti, Ekiti State, Nigeria.