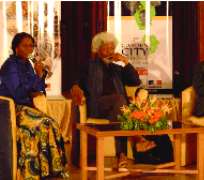 The buzz went beyond the telling. For the book industry and the literati, memories of the third Garden City Literary Festival, which ended last Saturday in Port Harcourt, will not cease to linger.

For four days, it was a melding of great ideas, creativity, book exhibition, drama presentations, intellectual rapport, readings, seminars, writing workshops. Above all, it was a festival in which the Nobel Laureate, Professor Wole Soyinka, together with other literary figures, shone like stars.

At the opening ceremony at the University of Port Harcourt on Wednesday December 8, when news filtered out that the 2008 Nobel Laureate, GM le Clezio, who had been hitherto hyped for the festival, was not disposed to attend on medical grounds, it almost made faces gloomy. But, as the events got under way, his absence was well complemented by the Kongi, Africa's first Nobel Prize winner.

Hosted by the Vice Chancellor of Uniport, Professor Joseph Ajienka, the Ebitimi Banigo Hall, where the event took place, seethed with anxious crowd as the keynote speaker, Professor Olu Obafemi, Director of Research, Nigerian Institute for Policy and Strategic Studies, Kuru, presented a paper, 'Fifty Years of Nigerian Literature: Prospects and Problems', which reflected the theme of the festival.

In his engrossing presentation, he noted that Nigerian literature, over the last 50 years, has given a robust account of itself, though much needs to be accomplished. However, he rated the accomplishments of Nigerian writers above the country's politicians.

'This is to state that Nigerian writers forged a nationalist, rather than an ethno-national, vision for our literature. Our politicians, alas, 50 years on, failed to emulate that feature in their practice of politics. This critical uniqueness devolves on the fact of its transcendence from origin, from its ethnic back-drop, to assume a national character,' he remarked.

Earlier, the founder of Rainbow Book Club, Mrs. Koko Kalango, said this year's festival was dedicated to celebrating the contribution of writers to nation building in the last fifty years, which informed the decision to honour 50 writers at the festival.

'A platform such as the GCLF, where men and women of letters congregate to express thoughts and ideas for the betterment of society, where players in the book chain industry can converge to do business, where literary talent can be nurtured and exposed, is of immense value to any society,' she remarked.

In his message, the VC of the university said he was excited to be part of the festival that is breaking barriers and building new bridges among students, scholars, patrons of the arts and general stakeholders, noting, too, that the gradual crystallization of the festival into a major cultural movement that is certain to impact on the intellectual climate of Port Harcourt and the Niger Delta is worth celebrating.

However, Dr. Minima Minisoma, who chairs the Rivers State chapter of the Association of Nigerian Authors (ANA), in his remarks, lambasted Nigerian writers for being lackadaisical to national issues, urging them to be more engaging in order to be more relevant to the society.

The address by the state governor, Chibuike Amaechi, was a departure from the previous speeches. Speaking extempore, he brought a humorous angle to a socio-cultural discourse. The governor, who majored in English Studies from the University of Port Harcourt, disagreed with the position held by Professor Olu Obafemi that Nigerian literature is still as vibrant as it used to be, saying that the quality of literature of the Soyinka and Achebe era is not what we have today. 'I am not saying that we don't have great writers, but we have to improve on it,' he said.

The governor noted that Nigerian writers don't have to be writing about love affairs when there are problems in the society to be addressed. 'You can't be writing about love affair when people are hungry. The decadence in the society must be seen in the books we read; if not so, we will lose interest,' he noted, just as he stated that it is the fear of hunger that has led most Nigerians to the search for God, as countries with poor economy are those that are more spiritually-inclined.

Harping on the importance of writers in society, he said politicians won't change for the better except writers, who are the voice of the people, voice out their resentments for societal anomalies.

With the opening ceremony over, other events lined up for the day took off in full swing. These included a seminar on 'The Rise of Social Media Use and its Effect on the Book Industry in Nigeria,' facilitated by Myne White, including the discussants: Bibi Bakare (Cassava Republic), Muktar Bakare (Farafina), Austin Onwubiko (African First) and Bankole Olayebi (Bookraft).

Another highpoint of the day was the creative writing workshops held for budding writers by award-wining writers, Helon Habila, Adaobi Nwaubani and Zainabu Jallo. The book fair and photo exhibition also began in earnest, with scores of exhibitors making brisk business at the Presidential Hotel venue. An exciting first day was rapped up later in the day when a drama troupe from the University of Port Harcourt enacted a play, Love's Unlike Lading, by Femi Osofisan.

The writing workshops continued the next day with the award-winning writers, as well as a master class on non-fiction facilitated by Dr. Reuben Abati, the chairman, The Guardian newspaper editorial board. Chaired by Professor Ike, the seminar on 'The Business of Writing', featured the discussants: Bibi Bakare, Muhktar Bakare, Austin Onwubiko and Bankole Olayebi.

The appearance of the Nobel Laureate, Professor Wole Soyinka, at the International Conference and Press Forum at the Senate Chambers of Uniport on Friday upped the ante of the celebrations. A sight for sore eyes, Soyinka answered a wide range of questions on his writings, Nigerian literature and publishing in general.

As a child, the Nobel laureate said he was a voracious reader. Rejections for a writer from publishers, he said, at the early stage, should not be a hindrance for any writer, even as he said that when he started writing, his royalties were not much, but it didn't deter him from writing. To sustain the gains of 20th century, which Nigerian literature had made, he encouraged writers to keep on writing.

For the second time in a day, Soyinka was presented to the public at the 'Meet the Author' programme held later in the afternoon at the Presidential Hotel, where he responded to question from fans, participants and schoolchildren. Governor Amaechi also had a time-out with arts journalist later in the day in the afternoon at Government House, Port Harcourt.

However, the Award Gala & Command Performance on Friday Evening was delayed for two hours at the Banquet Hall, Government House due to the arrival of the Vice President of Nigerian Namani Sambo, who was on an official visit to the state. The night was, however, boosted by his presence when he enjoined in the gala night with the state governor moments later.

The Award Gala and Command Performance was most memorable with the electrifying performance of Odia Ofeimun's dance drama, A Feast of Return, a socio-political commentary on South Africa with a Nigerian tinge. Awards were also presented to fifty Nigerian writers, who had contributed immensely to Nigerian literature.

When the festival ended on Saturday after a special performance by students entitled My Nigeria Story in Drama, facilitated by the group, Children and the Environment, as well as a public performance of Ofeimun's A Feast of Return at the Presidential Hotel in the evening, it was a craving to turn back the hands of the clock, for many.

For Koko Kalongo, whose Rainbow Book Club organised the festival, in partnership with the Rivers State Government, she could be obliged of another hurrah. 'Watch out for other international figures who will join Professor Chinua Achebe for next year's festival,' she announced enthusiastically.

An upbeat ANA President, Jerry Agada, told The Sun at the end of the festival: 'With what the GCLF did at this festival and what ANA has been doing so far, Nigerian literature will continue to excel.' It can't be gainsaid.