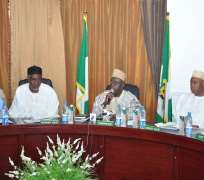 The Governors issued a joint a statement signed by twenty of them after an emergency meeting in Abuja declaring they would support Jonathan for one four-year term in office.

The declaration is a big boost for the President ahead of the party's primaries.Katsina state Governor, Shehu Shema who read the brief communiqué at the end of their emergency meeting in Abuja said, having deliberated extensively on democratic practices all over the world, we the 20 Governors observe as follows:

“Democratic system all over the world recognize the principle of incumbency and continuity. “Entrenched democratic culture persistent in presidential system and our constitution entitles our President to run for a send term which the PDP governors support.

“The governors also recognize the Yar’Adua/Jonathan ticket and therefore hereby support and endorse President Goodluck Ebele Jonathan to contest the 2011 election as the PDP presidential candidate for a period of four years only.”